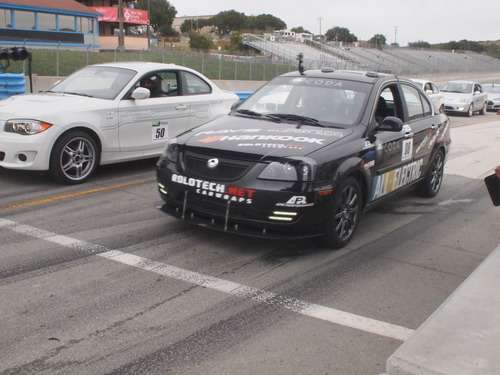 In what may be the biggest yet assemblage of high powered electric vehicles, the 2012 REFUEL races, in its fourth year, is turning into a powerhouse of an informal electric racing event.
Advertisement

If the electric car stereotype never changes, many think electric vehicle adoption will be slow. The stereotype? That they're slow, boring, ugly, golf carts, that no MAN in his right mind would ever drive. The REFUEL race, now in its fourth year, is a chance to bring electric cars and motorcyles on a world-class race track, Laguna Seca, for some serious electric fun and racing action. Last weekend's REFUEL 2012 was perhaps the largest ever assemblage of high powered electric cars and motorcycles in one place. The topmost of these were Brammo's Empulse RR prototype electric motorcycle, electric race cars from Kleenspeed and Yokohama, and a flotilla of Tesla Model S's and Tesla Roadsters, as well as BMW ActiveE's, Nissan Leaf's, and even a couple Chevy Volts.

Two full-on electric race cars came, one the EV-X11 from Kleenspeed, the other is Ikuo Hanawa's off-road electric race car sponsored by Yokohama Tires. Kleenspeed has run at REFUEL since 2009, and uses those results to claim their car is the fastest electric track race car in the world. This was the first year for Hanawa and Yokohama at REFUEL, their attendance prompted because of the postponement of the Pikes Peak Hill Climb. See Electric race cars from Yokohama and Kleenspeed at REFUEL 2012 for a writeup of these two cars.

The main focus of REFUEL is a time trial race where the drivers are not racing each other, but competing for the best lap time. However, the rest of the day is normal racing action meant so the drivers could practice and learn the track. REFUEL is organized by Speed Ventures, a racing instruction school, and is run partly for instruction, and partly for the race results. While some of the attendees are experienced race drivers, most are individuals who own an electric vehicle and are loving the chance for a track day at the famous Laguna Seca raceway.

The pleasant surprise of the event was the results of the production electric car class. Of the 25 cars in that class, up from 10 cars in 2011, the top four were Tesla Model S's, and the next four were Tesla Roadsters. The Model S, as a luxury sedan, isn't what one would think would be beating a sports car like the Tesla Roadster, but there it is.

Also present were 13 electric motorcycles, most of which were Zero S's, many of which were ridden by Zero Motorcycles employees. Many of those bikes had been, um, modified considerably. Brammo brought the Empulse RR, ridden by Steve Atlas, making that bike the only one of the top end electric bikes at the 2012 REFUEL.

The Empulse RR is the bike with which Brammo prototyped what has become the Empulse R. With the Empulse RR, Brammo won the 2011 North American TTXGP championship, and is on their way to repeating that achievement in 2012. This bike is in the top league of electric motorcycles, and is considerably faster than the Zero S's. Steve Atlas's lap time was 1:40.269 and after the race he felt the bike was capable of even more. This bike is due to return to Laguna Seca in a couple weeks for the e-Power / TTXGP race during the MotoGP weekend.

The Zero S's top out at 90 miles/hr (or so) and gave lap times from 2:00.389 (for a modified Zero S ridden by Jamie Perugini) to the 2:10-2:20 range for the others. One particular bike, known as the Bicycle of Doom, is a completely custom build that loosely resembles a bicycle, and even has operable pedals. Last year Luke Workman had a 2:41 laptime with the Bicycle of Doom, and this year he goosed it up to 2:13.453 thanks to a bigger motor and controller.

The event is organized by Speed Ventures, a racing instruction company. They run track days all the time giving amateur racers a chance for track time, and expert racing instruction. Four years ago they started the REFUEL series, recognizing the growth of electric cars and the plausibility that electric cars would become mainstream, even in racing. Today, they have a rapidly growing event on their hands, that more than doubled over the 2011 attendance, due largely to the ever-increasing number of production electric vehicles from major manufacturers.

During the practice round before the time trial, there was a full grid of approximately 30 electric cars racing together. Every weekend there are gas car races with this many cars, but rarely, if ever, has there ever been this many electric cars together on a track in any sort of race.