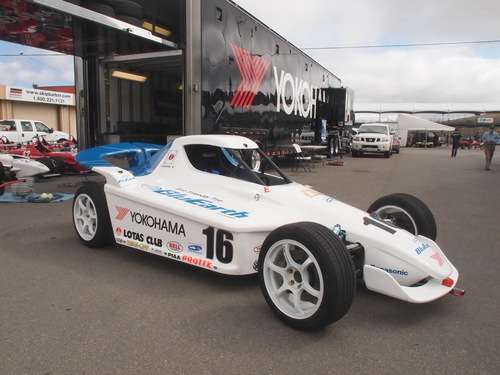 Electric race cars from Yokohama and Kleenspeed at REFUEL 2012

While there are plenty of electric cars being built nowadays, there are few outright electric race cars in existence, so it was rare that two would be in the same race, last weekend at the REFUEL 2012 race.
Advertisement

Because of the fires near Pikes Peak, the Hill Climb event has been postponed, and the Yokohama team were invited to come to the REFUEL event.

Despite both being electric cars built specifically for racing, they are very different in style and classification, which unfortunately means we cannot directly compare the results.

Kleenspeed's car, the EV-X11, based on a West WX10 race car chassis normally used in American Lemans racing, is running an electric drive train and battery system designed by Kleenspeed. The UQM motor and controller are capable of 200 HP, 300 ft lb of torque, the battery pack and management system was designed by KleenSpeed, as was the integration of the entire vehicle. The EV-X11 serves as their "rolling laboratory" for designing energy storage, battery management, and vehicle control systems.

With pro racer Kevin Mitz driving, the EV-X11 set a new lap time record for electric track racing cars (at Laguna Seca) of 1:32.046. This is wicked fast for Laguna Seca, nearing the speed for the MotoGP bikes. It's also 6 secs faster than Tim Collins did last year, 1:38.858. For separate coverage of the KleenSpeed car, see: KleenSpeed Scrambls and a Wicked Fast EV-X11 Racer.

The other electric race car, the HER-02, was built by Ikuo Hanawa, and the team was on their way to Pikes Peak when the fires forced a delay of the Pikes Peak Hill Climb Challenge. The car is a custom built chassis built for off-road racing. It uses an electric drive train from AC Propulsion that can produce up to 200 kilowatts of power (268 HP) and 350 Nm (258 ft lb) of torque. The Sanyo lithium-ion battery pack stores 37 kilowatt-hours of electricity at 385 volts. The gearbox offers two speeds, for a maximum of either 118 miles/hr or 155 miles/hr. The car has raced the Pikes Peak Hill Climb the last two years, winning in the EV category each time, with a 12:20.084 record in 2011. During the REFUEL event they achieved a 1:48.936 lap time.

The lap times of these two race cars are not directly comparable, because they're very different cars. The EV-X11 is a formula-style race car, meant for track racing, that sits very low to the ground, giving great ground effects. The HER-02 sits much higher because it's built for off-road racing. Additionally it was outfitted with Yokohama Blue Earth street tires, not racing tires. All that means the slower speed for the Yokohama car is as expected, due to its configuration. A closer comparison race would be for KleenSpeed's car to race either the Lola Drayson B12/69EV or the Toyota EV P002. KleenSpeed's representative said they're pondering whether to enter the Pikes Peak Hill Climb, which would put them in a competition against Toyota's car.

To put a different perspective on these results, the 2012 REFUEL race included a large number of Tesla Model S's and Tesla Roadsters. The fastest of the Model S's gave a 1:51.832 lap time, but did not beat last years 1:50.883 lap time record set by Joe Nuxoll. These times are very close to the 1:48.936 laptime for the HER-02.