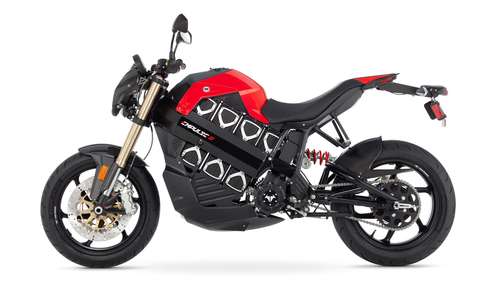 Last night, to thumping music in a packed trendy club on Hollywood's Sunset Blvd, Brammo officially launched the Empulse and Empulse R electric motorcycles. These motorcycles were first announced in July 2010, and originally slated to be released in 2011, but the choice to use a 6-speed transmission (the Integrated Electric Transmission) delayed delivery by year, in which Brammo CEO Craig Bramscher allowed the company to create a great motorcycle that happens to be electric, rather than a great electric motorcycle.

“It was important to Brammo to create a great motorcycle and we paid attention to customer feedback to create just that,” said Craig Bramsher CEO and president of Brammo. “From concept to production the Empulse product has evolved quite a bit. We are bringing you a different motorcycle that promises to be more than what our riders expected.”

The most intriguing and, to some, controversial feature of the Empulse is the 6-speed transmission. Electric vehicle makers have long maintained electric vehicles do not need a transmission first because of full torque is available at 0 RPM, and second because the power band of electric motors is much wider than gasoline engines. Technically, in most cases, a transmission is simply unnecessary for an electric vehicle, whereas it is an absolute requirement for a gasoline vehicle. This line of argument quickly becomes very technical, and misses a very important point. Motorcyclists expect there to be a transmission, and the normal setup of motorcycle controls includes a clutch lever and gear selector which, if missing, can feel weird.

While adding a transmission could make it easier for motorcyclists to transition to an electric bike, is there a technical reason for the transmission? According to Brammo's engineers there is (note: we haven't had a test ride, hint hint, to experience it for ourselves, wink wink, nudge nudge).

The production Empulse and Empulse R has a 103.6 volt battery pack, while the top electric race bikes just mentioned (including Brammo's Empulse RR) have pack voltages close to 400 volts. According to Brammo engineers, if they could get more voltage onto the production bike they could skip the transmission. The transmission allows them to deliver a higher speeds, without having the higher voltage battery pack. For comparison, the Zero S electric motorcycle has a similar battery pack voltage, no transmission, and tops out at 88 miles/hr. While 88 miles/hr is plenty fast for even highway commuting,

All this technical stuff is interesting to geek out on, but what does the bike look like? And what did the launch party onlookers think?

The Empulse hits all the "sexy street bike" style points in excellence, looking every bit the race-style street bike made by other motorcycle manufacturers. It will fit in very well among other similar motorcycles, while having design elements that play up the electric aspects using powerful design cues. For example, the battery pack enclosures with black and silver colors at the center of the bike, enclosed within the main frame members.

The frame design serves not only to give the Empulse a striking profile, but also serve a very functional purpose that was proved at last weekends TTXGP race at the Infineon Raceway. During practice rounds the Empulse RR suffered two serious crashes with the bike tumbling around on the track and into the weeds, with the frame protecting the battery pack from damage. That unintended bit of research results proved the stability of the Empulse design.

Judging by the excited response of the crowd, clustering around and taking pictures, the two bikes have the looks that open wallets. However, the prices caused a variety of responses. Some gasps were heard when Bramscher announced the pricing, and others thought the prices were fair, and were better than the $20k+ fears circulated on some discussion boards.

During 2013 Brammo will built a special version of the Empulse, the Empulse TTX, properly configured to race in the TTXGP electric motorcycle racing series.

logo desging service wrote on June 14, 2020 - 3:40pm Permalink
Hello! I just wanted to ask if you ever have any problems with hackers?
Graphic Design ... wrote on June 15, 2020 - 12:21pm Permalink
I found your blog on google and loved reading it greatly. Much obliged to you and good fortunes