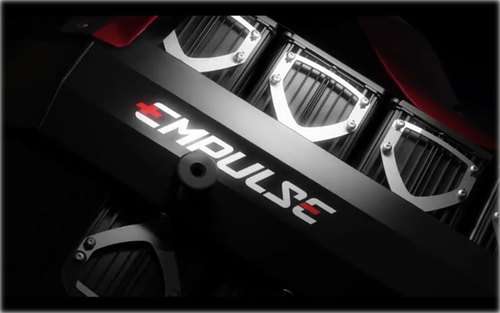 As promised with last weeks video teaser release, Electric Motorcycle manufacturer Brammo announced today the specifications for the upcoming Empulse and Empulse R electric sport bikes, with the official unveiling still slated for May 8 in Los Angeles. As expected the specs leapfrog those of the top bike from Brammo's main competitor, Zero Motorcycles, with delivering in the Empulse R a 100+ miles/hr electric motorcycle, with a 121 miles range (city) and an integrated J1772 charging port for a 3 hour recharge time from empty, making 200+ mile a day trips possible.

Brammo will be unveiling two bikes on May 8, the Empulse and Empulse R. The spec sheet released by Brammo are for the Empulse R, leaving the Empulse a bit of a mystery at the moment.

The slightly longer range for the Brammo Empulse R over the Zero S ZF9 simply reflects a slightly larger battery pack. However there is an interesting side note in comparing the spec sheets. Because Zero reports the highway range as 66 miles versus Brammo's highway range of 56 miles, the first reaction is a "huh". The larger battery pack should give a longer range, but the numbers don't match the expectations, leading to confusion. Clarity sometimes comes when you stare long enough at the footnotes. In this case we learn that the test procedure Zero used to determine the 66 mile range on the Zero S ZF9 is identical to the test procedure Brammo used to determine the combined range of 77 miles. That is, Brammo's test procedure for the highway spec is the "Constant Speed Riding Range Test Procedure for Electric Motorcycles" which uses a constant 70 miles/hr speed. Zero's test procedure for the highway spec is the constant 70 miles/hr speed, averaged with the results of the city speed. Zero's highway test procedure is the same test procedure Brammo uses for the combined range. But lets not spend too long in the footnotes, that's boring.

The Empulse R weighs in at 440 lbs curb weight (200kg) and a cargo capacity of 365 lbs (165 kg), making it a hundred pounds heavier than the Zero S ZF9. The frame is an all aluminum fabricated by Accossato in Italy, and comes equipped with Marzocchi forks in the front, Sachs shocks in the rear, Marchesini wheels front and rear, and Brembo disc brakes front and rear.

The permanent magnet AC water cooled motor is rated for 40 kilowatts (54 hp) and is paired with a Sevcon controller. It delivers a peak torque of 63 Nm (46.5 foot pounds).

As we noted last week the Empulse R includes the IET 6-speed gearbox that Brammo claims will increase performance and efficiency. Specifically, Brammo's press release claims the gearbox "endows the Empulse with rapid off-the-line acceleration, sustained high speed and industry-leading range." However, judging from the range specifications we do not see a gain from using the gearbox. The "industry-leading range" can be attributed to the larger battery pack, not the gearbox. We won't know about the other attributes until we swing a leg over both bikes to check them out in real riding.

A most useful feature of the Empulse R is the integrated J1772 charging port, that offers a much higher charging speed than the Zero S ZF9. By incorporating this port into the Empulse R, owners will have easy access to public recharging facilities. The 3.5 hour full recharge time makes a long range trip more practical with the Empulse R than it is on the Zero S ZF9. That bikes on-board charger only supports a 1 kilowatt charging rate, for a 9 hour recharging time. Brammo claims that "10 minutes of casual charging adds 5 miles of range" (which makes one wonder how much range is add if you're nervous while charging), and that with careful planning 200 miles a day (or more) of riding is possible.

While dedicated long range motorcycle riders might sneer at "only" 200 miles a day, this capability for a reasonably fast recharge makes it more feasible to zip back and forth around a large metropolitan area with little worry over the total range.

Brammo has not released price and availability for either the Empulse or Empulse R at this time. The Empulse line is expected to include the Empulse TTX, announced by Brammo last summer. The TTX was billed at that time as a partnership between Brammo and the TTXGP, packaging the Empulse to meet the requirements of the TTXGP rule book as well as on-track support. However, Brammo's press release today did not mention the Empulse TTX.

Stay tuned for more information after Brammo's unveiling on May 8.

protomech wrote on April 19, 2012 - 10:02am Permalink
If you do the math, the 7.9 kWh Zero S ZF9 gets 43 miles of highway range, which works out to 184 watt-hours used per mile. The 9.3 kWh Empulse R gets 56 miles of highway range, which works out to 166 watt-hours used per mile, or about 10% lower energy consumption than the Zero. Scuttlebutt is that the R has a fairing, which should help highway range. So it's unclear how much of the improved highway range is due to the transmission and how much is due to the fairing. We'll see on May 8 if the fairing rumor is correct.
David Herron wrote on April 19, 2012 - 10:16pm Permalink
And, as you know very well, the bike Brammo raced last year had a fairing, unlike the naked bike they showed in 2010.
Scootabilly wrote on April 20, 2012 - 11:24am Permalink
Where will the unveiling be in L.A.? Will it be open to the moto-public?
David Herron wrote on April 20, 2012 - 12:42pm Permalink
I don't know yet where. One possibility is the EVS26 trade show that's happening the same time in LA.
jzj wrote on April 20, 2012 - 2:34pm Permalink
1. And just like the Zero, no passenger seat. I just don't get that: at least make it an option. At least the Zero says it may soon have this as an option and perhaps Brammo will soon make it an option as well. 2. I'm curious: for the weight and cost of the transmission, couldn't you throw some more battery on the thing and thereby provide greater performance and range without the complexity (read: stuff to break)? 3. I really enjoyed my Zero test drive: I look forward to testing the Brammo. I had no major quibbles with the Zero, other than the silly little mirrors (readily replaced). The components on the Empulse look to be even better than those on the Zero -- or at least, more expensively sourced. Ultimately, the Zero might be functionally on par with the Empulse, and we know the cost of the Zero, so let's see if the Brammo is competitively priced.
protomech wrote on April 20, 2012 - 3:37pm Permalink
1. The Zero has an optional passenger pegs kit ($350, ouch) that will be available very soon. Brammo has stated that the Empulse will have a passenger position, and on the specifications page lists a 360 lbs combined rider + passenger + cargo limit. 2. Yep. That's the tradeoff with a gearbox - increased performance vs increased complexity and added weight.You could also use the weight and packaging for a bigger motor and possibly get even better performance, depending on the range of speeds you need to ride.. you'll note that almost all of the race bikes have been single speed, and they're generally not cracking wild wheelies off the line. 3. Yep. Cost is a big question now.. but I think it's clear finally that the Empulse is coming along rapidly : )
jzj wrote on April 20, 2012 - 3:54pm Permalink
@Protomech: Good info, thanks. It occurs to me that, in addition to the transmission, there are a couple of other notable differences between the Zero and Brammo: the Zero is air-cooled and the Brammo is liquid-cooled, and the Zero has a belt (super quiet!) and the Brammo has a chain. I really like the Zero, but I sense the Brammo is a bit more serious. Again, the question is how much seriousness costs.