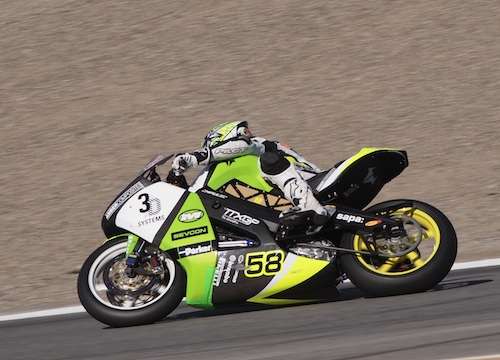 Brammo teases Empulse electric motorcycle details ahead of May 8 unveiling

The long-awaited Brammo Empulse electric motorcycle is due to be unveiled on May 8 in Los Angeles, after design changes forced more than a year's delay from the original production date in 2011.
Advertisement

In July 2010, electric motorcycle maker Brammo enticed us with the unveiling of the Empulse, a high end electric motorcycle that was supposed to go on sale during 2011. In 2011, however, Brammo decided to change the design, delaying introduction until 2012. It's now 2012 and Brammo has announced the official unveiling of the Empulse would take place in Los Angeles on May 8, and in the meantime have posted a video talking about the motorcycle and its amazing heritage. Curiously, Brammo is expected to be racing in the TTXGP on May 4-6 near San Francisco and one wonders what this means about Brammo's participation in that race.

While at the moment the Brammo website still shows spec's dating back to the 2010 initial announcement, up-to-date specs are to be revealed next week on April 18 giving us "every opportunity to become familiar with the Empulse before seeing it for the first time on May 8th". Let's start with those original specs.

The Empulse is a street/race style electric motorcycle and in 2010 Brammo promised a 100+ miles/hr top speed, and a range of 60 miles ($9,9995), 80 miles ($11,995) or 100 miles ($13995). The three range estimates were due to selling the bike in three battery pack sizes, 6, 8 or 10 kilowatt-hours. The 2010 design used an AC Synchronous electric motor rated at 40 kilowatts, with a water cooling system. At that time Brammo had been using Valence LiFePO4 batteries in the Enertia, but promised the Empulse would use a custom designed lithium battery chemistry with higher energy density and higher performance. The Enertia+ also uses this new battery chemistry, enabling an 80 mile range on that bike while the original Enertia had only a 42 mile range.

The design change that led to the delay, was to incorporate a 6 speed transmission licensed from SMRE Engineering. That Italian engineering company developed the IET, or Integrated Electric Transmission. SMRE describes that transmission as "an extremely compact, high performance mechatronic propulsion unit that emulates the feeling and performance of a traditional internal combustion engine, with a specially developed electric motor, clutch and gear shift, and software that enables electric vehicles to accelerate hard from the line up to a high top speed, something that is just not possible to achieve with a single-ratio electric motorcycle."

Electric motorcycles differ from gasoline powered bikes in one specific way: engine braking. Gas powered motorcycles have a manual transmission, and just as drivers of manual transmission cars often use the engine to slow the car, so too do motorcycle riders. Slowing down is often just a matter of rolling back on the throttle, with more rapid deceleration requiring the mechanical brakes. Electric motorcycles tend to not even have a transmission, and unless the bike has regenerative braking in its design rolling back on the throttle just lets the bike coast. This means electric motorcycle riders operate their bikes a little differently than they do a gas bike, instead of relying on engine braking they're hitting the mechanical brake more often.

What we see in the video below is Brammo's telling of the company history that led to the Empulse.

The company raced an early prototype, then called the Enertia TTR, on the Isle of Man in 2009 at the inaugural TTXGP race, and the video shows many scenes from that race. In 2010 the Empulse prototype bike was to have been raced in the e-Power electric motorcycle race at Laguna Seca in July, but a snafu (Brian Wisman was heard to say "I broke it") converted the bike into a pretty, but inert, statue in the Brammo booth during the race. In 2011, Brammo returned to the track and raced throughout the 2011 TTXGP North American season, and again this is mentioned in the video with many scenes coming from those races.

In the video Brammo lays claim to the phrase "Fastest Production Electric Motorcycle". As we've seen, the 2011 Empulse was beaten in races by bikes from Lightning Motors and MotoCzysz. Further, Lightning Motors holds the land speed record for electric motorcycles (215 miles/hr) set last summer at the Bonneville Salt Flats. How, then, can Brammo make this claim? It's quite simply because of their intention to produce the Empulse in much bigger quantities than Lightning or MotoCzysz. The key is the word "Production". It's one thing to build a few electric motorcycles in small production runs (as Lightning is doing), and it's quite another to create a design allowing a manufacturer to turn out hundreds of them.

The only competitor Brammo has at this level of electric motorcycle production is Zero Motorcycles. The Zero S ZF9, that company's top end bike, delivers a maximum speed of 88 miles/hr, and a city/street range of 114 miles, or a highway range of 63 miles. Brammo claims the Empulse will deliver over 100 miles/hr speed and a 100 mile range, and if the company can deliver on this claim it will be a leapfrog maneuver jumping a bit beyond the performance level delivered by Zero today.

The video also discusses the battery pack, the Brammo BPM 15/90. It is described as comprising 36 cells and to incorporate an active cooling and heating unit to keep the cells at optimum operating characteristics. In the 2010 announcement the battery pack voltage was specified at 88.8 volts, but 36 cells is most likely to bump the pack to 118.8 volts, depending on the per-cell voltage of the cells used in the BPM 15/90 (note: the '90' may be a hint to the battery pack voltage). In any case the pack looks nicely packaged, and one brief scene shows a technician inserting a rectangular cell into the pack.

The video closes with a brief outline of what must be the actual bike to be unveiled in May. It has the outlines of a race bike, but we cannot tell enough from the brief glimpse.

Anonymous wrote on May 5, 2012 - 9:45pm Permalink
These e-bikes are improving range , speed and/or battery life every few years. With only two companies competing, they seem to be driving each other to new heights. I'm looking for that $11,000 level, commuters bike to reach a range of 75 hwy miles to give me plenty of buffer for my 56-mile, round trip commute. They've already got the speed and Zero has the battery life I'm looking for. The Zero S has 75 mph cruise and twice the charges to 80%, but costs a grand more. The Enertia Plus has a 62 mph top speed; does not list cruising speed, which is concerning. I like the style of the Brammo, but it'll have to go farther on a tank of electric fuel before I can jump in.
David Herron wrote on May 10, 2012 - 5:14pm Permalink
Actually, now that we know the price for the Empulse ... they came in at a much higher price than the Zero S ZF9. See http://www.torquenews.com/1075/brammo-raises-bar-electric-motorcycles-empulse-r-launch
Anonymous wrote on May 11, 2012 - 3:42pm Permalink
Yes, it's true that the Empulse came in at a higher price than either Zero S model, but the Empulse is more like the Zero DS, which is a bigger, higher-performing bike. The Enertia Plus is most like the Zero S ZF6, but the Zero S ZF9 is basically the same bike plus a few batteries for more range. Brammo doesn't really have a bike like the ZF9 version, at least not shown on line. Both Zero S models claim higher top speeds than the Enertia Plus, but cost a little more. The ZF6 is $1000 more and the ZF9 is about $3500 more. I'm interested in a basic commuter bike that is a little more practical for highway commutes than what is being offered. It doesn't have to be the best bike for interstates, but I do take state hwys, some of them 4-lane, to and from work. I need to cruise at least 62 mph for 30 miles, charge for 9 hrs, while at work, and cruise back home at 62 mph, while not overly reducing battery life. While the Zero S ZF6 claims to meet my criteria, there is not nearly enough buffer in there for me to jump in. Zero wants too much money for the ZF9, but it would probably fit the bill. Brammo's Enertia Plus is a little too slow (top speed listed @ 60 with no cruising speed mentioned), and does not provide enough buffer in the range. I would feel more comfortable with a claimed range of 75 miles or more, because I figure one can subtract about 25-30 percent from the claims, and that's what you'll get on typical terrain, in typical whether, on a typical hwy commute. I'm not a motorcycle enthusiast, and therefore do not connect with any of these subcultures with respect to styling (hogs and crotch rocket enthusiasts). I like the no-frill, basic, upright styling of the Brammo Enertia Plus. The Zeros are a little too stylish for my style. I'm looking for transportation alternatives that do not require petroleum-based fuels that are also energy efficient and not too much vehicle. That leaves electrics and biodiesel-capable diesels. Spark-ignition alternatives, like ethanol and natural gas, require modifications and the fuels have poor energy densities, and after driving diesels, drivers have a hard time getting used to going back to the poor low-end torque that comes with gas power. There is one diesel design that is extremely fuel flexible, extremely fuel efficient, and, if mass produced, would be cheap to build, because the design produces impressive power and torque without turbo charging and without direct injection. These items cause diesel applications to be expensive and also causes them to be fuel picky. This design, by Hayes Diversified Technologies is currently mounted on a dual-purpose Kawasaki motorcycle and sold to the Marine Corps. It has a 667 cc diesel engine and gets 102 mpg @ 45 mph, with 30 hp and 35 peak foot lbs of torque. On a lesser, commuter-type bike, it could get 100 mpg @ 55 mph while running pure biodiesel, jet propellant, or diesel fuel. I guess I'll keep waiting and hoping for entrepreneurs to come out with products. Of course, if America had more reasonably-thinking people that created demand for such products, that would help too!
David Herron wrote on May 11, 2012 - 6:45pm Permalink
I don't see how you come to the conclusion the Zero DS is like the Empulse, but the Zero S is not like the Empulse. The Zero S and Zero DS are almost identical other than some specific details in suspension geometry and components and the like. I have this directly from Zero engineers I spoke with last weekend at the TTXGP race. The Zero's are closer to the dirt bike style (the Zero DS is explicitly a Dual Sport meaning it is meant to handle both street and off road). However the Empulse is explicitly a Sport bike meant for track racing or regular road use by people who want to pretend they have a track bike. I know you said you're not into the various subcategories of motorcycles, but they are two different realms and appeal to different people. BTW I was told by a Zero engineer that the DS was better for hefty people, like me. FWIW