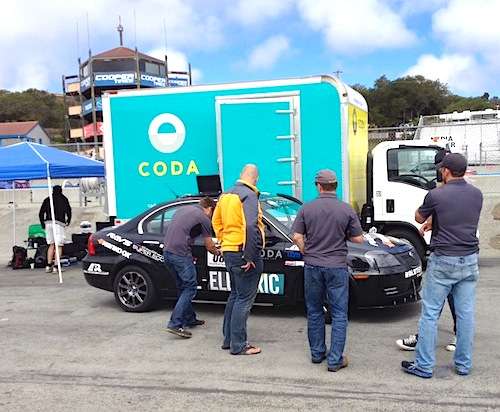 CODA Hits the REFUEL 2012 with a Race Ready Electric Car

The Californian electric car, EV company CODA had fun preparing one of their EVs for a fun weekend at ReFuel2012 happening today.
Advertisement

A small group of CODA employees are having fun this weekend and have worked hard on a donated pre-production CODA. What were they doing? They put in many after-work hours, used a lot of donated materials and plenty of their off-work time to turn an all-electric CODA into a track day vehicle. Yes, track day! That spells plenty of fun and the team on the Laguna Seca right now for REFUEL 2012 is proving it. The CODA REFUEL team worked on making the electric car faster, better handling with help from generous sponsors on a shoe string budget.

2012 REFUEL. This great event started in 2009, where Speed Ventures' REFUEL opened one of the greatest track on this planet, the Mazda Raceway Laguna Seca to electric cars and motorcycles. You will find production vehicles, prototypes, conversions and purpose-built race cars and motorcycles that participate in the SportElectric Time Trial. The biggest problem with racing electric vehicles is charging. To this end, temporary charging power is provided in the paddock.

This CODA project is a testament to the passion and fun electric cars can give you. This event also shows how a small company like CODA can participate and race their electric car. The team is running with other EV enthusiasts in a Sport-Electric Time Trial open track event today that will end at 5 p.m.

See below the warm up session.

Technically Speaking. In order to make the CODA the racer that it is, a new higher speed electric motor was used as well as a modified driveline software. The brakes and suspensions were thoroughly reworked and racing seats and harnesses were installed.

As we all know, racing cars sale and electric vehicles are no different. Whether we talk about Brammo and Zero Motorcycles or Mitsubishi and Nissan, racing is a way to show people electric cars not only work but also can be raced and often time in spectacular ways. This event is also a little different since full time racing is a very expensive ordeal these days. Gone are the days when almost anyone could start a race team, or someone with talent could jump at the wheel of a car race one day and get behind the handle bar of a motorcycle the other. REFUEL 2012 at the famous Laguna Seca is one of the best recipe to allow almost anyone to race in an affordable way.

The electric CODA is going sale in California and Oregon needs as much publicity it can get. The Mitsubishi platform manufactured in China has been thoroughly reworked to pass crash tests and safety standards in the USA, racing it is yet another way to appeal to the public. We wish CODA luck with today’s race at the REFUEL 2012 on the spectacular Laguna Seca racetrack.