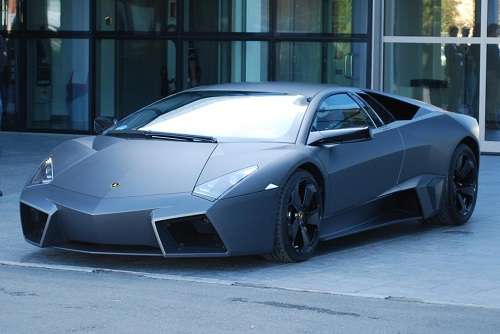 Gearheads with fat wallets will have an opportunity to own one of the world’s rarest supercars on the planet this summer, when the ultra-exclusive Lamborghini Reventón will be up for sale at the (also) exclusive H&H Auctions set to be held at the famous Motorexpo.
Advertisement

The Lamborghini Reventón is expected to sell for a £1 million British pounds, around 1.6 million US dollars. The Reventon is one of only 20 produced is assumed to be the only example in the UK. So this is an opportunity car collectors will not want to pass-up.

The auction is set to take place at the Canary Wharf from June 11th-17th.

The Lamborghini Reventón was revealed to the public for the first time at the Frankfurt Motor Show back in September 2007 and, despite commanding an asking price of €1 million Euros (1.3 US dollars), which doesn't include local taxes, all 20 units were sold before the car had even been unveiled in Frankfurt. That's good salemanship!

The Reventón is powered by a 6.5-liter V12 engine producing 650bhp, the carbon-fiber Reventón can hit 0-62 mph in just 3.4 seconds and go on to a top speed of 211mph, ensuring the car has more than enough pace to live up to its stunning F-22 Raptor jet fighter-inspired body.

This Reventon going up for sale is part of H&H's “Supercars and Superclassics” sale. “But even those who can’t quite justify the £1 million asking price for the Reventón can get up close to their potential next purchase – be it classic or modern.” commented Graeme Carver, Motorexpo CEO.

Other notable cars going up for auction are an Auburn Speedster replica as well as a number of vehicles from brands such as Ferrari, Pagani, Maserati, and Koenigsegg.

A host of car manufacturers will display more than 250 new models. With on-the-road prices starting from less than £8,000 ($13,000 dollars) there will be a car for every buyer. Leading automotive brands include Bentley, BMW, Jaguar, Kia, Land Rover, Mercedes-Benz, Vauxhall and Volvo.

Mr. Carver did admit though “The appearance, let alone sale, of a car as rare as the Lamborghini Reventón is sure to attract a large number of supercar enthusiasts and collectors to Motorexpo this summer,”

The Motorexpo organizers are expecting more than 425,000 visitors to enjoy this year’s event and visit Canary Wharf’s 200-plus shops, bars, cafes and restaurants.

Motorexpo offers visitors the unrivaled ability to actually sit in all the cars on display. Something you don't get to do at a lot of auto shows.

The Motorexpo also offers full test-drive capabilities, giving visitors the chance to get behind the wheel of the very latest models on the roads around the famous Canary Wharf business and shopping district.