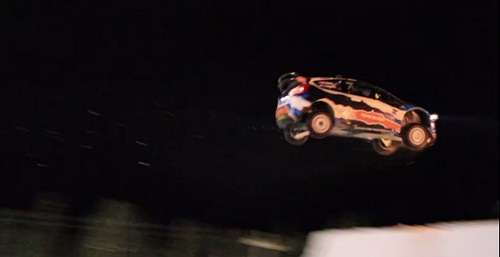 How far do you need to jump a car in snow to qualify for a world record? Mads Østberg jumped his highly tuned World Rally Championship Ford Fiesta Rally Car 50 meters over the snow, which is about 164 feet. He now currently claims the world record for Snow Jumping in a Car. I am sure his parents are very proud.

The record-breaking snow jump was done at the “DC All in Trysil” event, which is a winter sports festival geared toward extreme sports. It took place in Trysil, Norway last weekend. (The event is sponsored by DC Shoes.)

The record-breaking jump was not all smooth for Østberg though. It took him several jumps to attempt to break the record, three in total. In the video below you can see the the first two not going as well. The first attempt he almost didn't hit the landing ramp, and in the second jump was pretty amazing but not one that was going to be remembered. The third attempt was clean, amazing, and 50 meters (164 feet) of car jumping craziness.

You can see the excitement Østberg feels when he complete the jump successfully (and safely) I might add gets out of the World Rally Championship Ford Fiesta Rally Car and stands on top of it while the crowd is cheering him on.

Østberg has moderate success in his Rally driving career, but now he can at least brag to other Rally Drivers that he can jump farther then any of them. (I wonder if he will brag to the ladies about it too?) This will not make him faster or come in first place, but surely will earn him some credit among the wacky world of Rallying.

Østberg's jump while quite amazing to watch, unfortunately may not be recorded in the Guiness Book of World Records, which records and collects all sorts of odd, interesting, and crazy world records. The jump is not “official” at least not for the time being. Guiness will not count it until it is validated. Who needs them with power of the internet and Youtube though?

Watch the video below to see the process of setting up the snow ramps, the attempts, and the world record snow jump!

Panasonic Updates Profit Forecast, Noting How Much Tesla Batteries Help The Jump
2022 Porsche 911 GT3 Laps Nurburgring in 7:04 With Journalist Behind The Wheel
END_OF_DOCUMENT_TOKEN_TO_BE_REPLACED