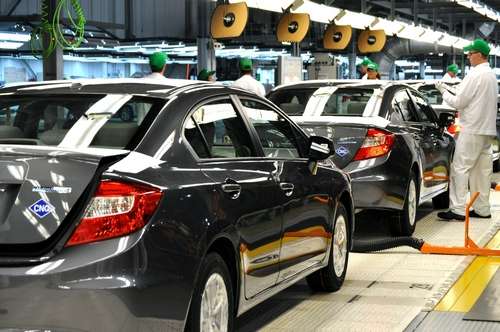 Honda to build new Acura ILX sedan in the US

Greensburg, Indiana - Honda has announced today that it will be building the new Acura ILX sedan at its manufacturing plant in Greensburg, Indiana. This means the Acura ILX will be an American-made car, reflecting Honda's commitment to adding jobs to the US economy.
Advertisement

The Acura ILX will be an all-new luxury sedan from Acura, Honda's luxury brand. Production is slated to start in the spring of 2012. The Acura ILX will be the least expensive model in the Acura sedan lineup, and should be offered with both gasoline and gas-electric hybrid engine options.

It is important to note that this will be Acura's first hybrid model. Honda has several hybrid models, such as the Civic Hybrid and Insight, but this is the first in the luxury brand's lineup. This will also be the first Acura model to be produced in Indiana. The Acura ILX will also be the first hybrid vehicle to be made at a Honda plant in America. The ILX engines will be American-made, and will be produced at Honda's Anna, Ohio engine plant.

"Building this all-new Acura vehicle as the exclusive global source is a big responsibility for our associates," said Honda Manufacturing Indiana President, Jun Nishimoto. "I am very proud of what our Indiana team has accomplished in such a short time, and we have great confidence in our ability to produce a world-class luxury vehicle that exceeds the expectations of Acura customers."

The Acura ILX will join the TL sedan, ZDX crossover vehicle, and the MDX and RDX sport-utility vehicles as the fifth Acura model produced exclusively in North America. Acura finished second among all luxury brands in the J.D. Power and Associates' 2011 Initial Quality Study.

The Honda plant in Indiana was recognized earlier this year by J.D. Power and Associates, receiving a Platinum Award for outstanding quality.

The Honda plant added 1,000 jobs to support a 2-shift production schedule, which started in October, 2011. The Indiana plant's capacity has more than doubled to 200,000 vehicles per year, adding American jobs and American-made cars to our roadways.

Currently the Honda plant in Indiana builds Civic Sedans, including the Honda Civic CNG (Compressed Natural Gas). The plant began operations in October of 2008, and exports Civic models outside of North America. The plant employes roughly 2,000 people and Honda has invested over $550 million in Indiana's operations. The plant is extremely environmentally-friendly and is a zero-waste-to-landfill factory, meaning no waste is sent to landfills, and maintains one of the lowest environmental footprints of any automobile plant in Honda's global production network.

Acura will unveil a concept version of the new ILX sedan in January, at the 2012 North American International Auto Show (NAIAS) in Detroit. Acura also will debut a new RDX sport-utility vehicle, a concept version of the next-generation Acura NSX supercar, and a Honda Accord Coupe concept at the show, as it moves to further strengthen its product lineup with new products, new technologies, and a sharper brand focus.

Honda has 4 auto plants in the U.S. and 7 in North America with a new auto plant under construction in Celaya, Mexico, which will begin producing subcompact cars in 2014. Honda's total automobile production capacity in the region, currently at 1.63 million vehicles per year, will grow to more than 1.87 million vehicles annually in 2014.

In 2010, more than 87 percent of the Honda and Acura products sold in the U.S. were built in North America, using domestic and globally sourced parts.

This shows that foreign car companies are building American-made cars, and are committed to creating American jobs and spurring growth in our economy. Bottom-line, Hondas and Acuras are American-made vehicles.