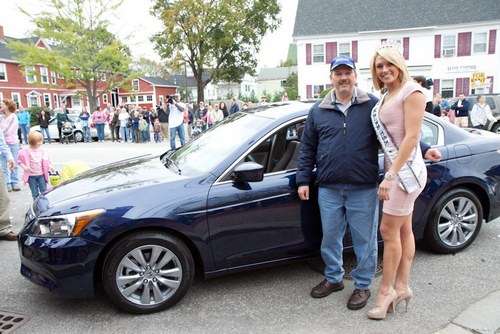 Million Mile Joe honored with 2012 Honda Accord and parade

Joe LoCicero a 53 year old man from Norway, Maine has done the unthinkable. He has driven his 1990 Honda Accord over 1 Million Miles! To celebrate this extremely amazing accomplishment, Honda threw a surprise parade in Saco, Maine for “Million Mile Joe” as he has come to be known.
Advertisement

The parade, along the Main Street of Saco, was complete with a giant odometer float powered by six people spinning life-sized hamster wheels. An airplane flew over with a banner that read, “Way To Go Joe.” Local schools got involved as well, as students from Biddeford High School made floats to honor Joe.

One of the creative floats was a replica of Joe and his 1990 Honda Accord nicknamed, “True Blue” due to its light blue color and a road adorned with banners marking special life occasions like Graduation, Just Married, Another Road Trip, and Million Mile Joe! The Westbrook High School marching band and color guard performed, and the Saco Middle School Marching Band performed as well. Shoestring Theater stilt walkers were part of the parade. Over-the-top costumed characters walked the streets, which included one person dressed in a number "1" costume with six other people dressed in "0" costumes, maps of Maine, and a pine-tree car air freshener. Joe and his wife, Sharon, happily waved to the crowd.

The parade interrupted a press conference where Joe received an oversized key to a new 2012 Honda Accord EX from Ashley Marble, Ms. Maine. The new car is a well earned gift from Honda to Million Mile Joe, but what is in store for “True Blue?” Joe is uncertain about what to do with his 1990 Honda Accord since he has his new Honda Accord, complete with a lot of safety features and creature comforts his old Accord lacks. He was going to try to sell it for $1 million to a Honda dealership so they could showcase Honda's reliability, durability, and longevity but so far nobody has taken him up on his offer.

“We at Honda are extremely proud of Joe. His accomplishment is really a testament to the reliability of the Honda Accord,” said Jessica Fini, a Honda PR spokeswoman. Tom Peyton, Honda's brand manager adds, "Joe's journey is a testament to his Honda's reliability and how people have come to count on Honda for more than 50 years to get them to where they need to go.”

A normal driver clocks around 10,000-15,000 miles on their odometer every year. It took Joe 15 years to get 1 million miles driving 62,500 miles a year. It would take an average driver 66-80 years to get to 1 million miles. That is farther than the average lifetime of 7 cars. Additionally 1 million miles would take you around the globe 40 times, it would be 4 trips to the moon... and back, and it would cost you $2 million in a taxi fare.

According to Honda, Joe is the the first person officially documented to have put 1 million miles on a Honda vehicle. Joe should feel quite proud of his accomplishment. Congratulate him on the Honda Facebook page.

Anonymous wrote on October 31, 2011 - 10:19am Permalink
This is my car
Andy wrote on November 6, 2011 - 11:30am Permalink
A couple of questions about this story: 1) What sort of LEGITIMATE mileage does he drive? By legitimate I mean necessary journeys such as shopping,school trips,work trips etc. Not trips simply to increase the mileage with no real purpose. 2) This could only happen in the US due to the fuel costs being so low. Here in the UK we pay over £6.00 per gallon and as such a mileage of 60'000 per year would be extremely expensive to fund!.Up until recently I drove a 25 year old VW Scirocco (1987) 90 miles per day to work and back. My yearly mileage was under 20'000......does Joe work hundreds of miles away from home? Lastly....why the lack of detail in the report about the questions above?
Anonymous wrote on November 7, 2011 - 10:24am Permalink
Wow, everything on the internet is fake, eh? I drove close to a hundred miles a day to and from work for several years. I put on over twenty thousand miles a year, and I know people who drove even farther than I to get to work. I drive a Honda, too, though, so I must be BSing you. But I suppose, while everyone else takes it as a cute story it's REAL important to nail minute details to satiate you skepticism.
Andy wrote on November 8, 2011 - 3:19pm Permalink
@Anonymous.A cute story about being rewarded with a new car for increasing ones carbon footprint ...and from a company that bangs on about ecological sensitivity and striving to save the planet? Yeah, real cute. I was simply asking for a break down of the drivers travel habits to understand the way that he could manage 62500 miles every year for 15 years without simply driving to increase the mileage! A few years ago there was a guy in the US who drove a VW Beetle to 2 million, or maybe more, miles. He used to get up every day and simply drive it around and around and around to crank up the mileage.....a complete waste of fuel,time and effort. If you are going to to do this sort of stuff have a CAUSE. Hell, raise money for charity or something but have a cause! Neil Armstrong didn't land on the moon and announce "hey......f'kin 250'000 miles in 3 days..check this lander!".
Adam Yamada-Hanff wrote on November 19, 2011 - 5:27pm Permalink
Hello Andy, I believe most of your questions can be answered in my original article, <a href="http://www.torquenews.com/1070/honda-accord-reaches-1-million-miles">Honda Accord reaches 1 million miles.</a> What I wrote above was on the parade that was given to honor Joe's accomplishment. Thank You, Adam
Anonymous wrote on January 26, 2012 - 9:55pm Permalink
better to do it in a 2012 car than a 1990 car for emissions dont you think. Just think how BIG the US military's carbon footprint is!!!!!