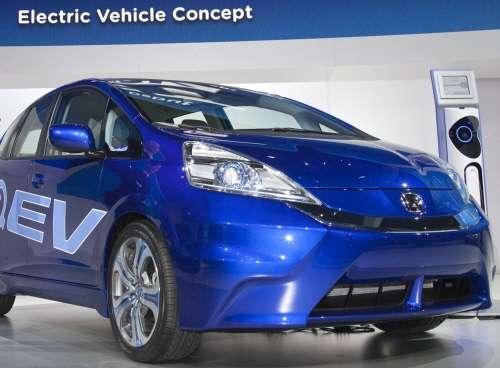 When the Los Angeles Auto Show opens next month, it will include the introduction of concept and production cars galore, most notably the 2013 Honda Fit EV, 2012 Honda CR-V and freshened 2012 Honda Insight.
Advertisement

The fourth-generation 2012 Honda CR-V has new looks inside and out, is more miserly on gas consumption than ever before and, as you might expect in this day and age, will offer some sophisticated new technology features, too.

Joining the CR-V in the spotlight in L.A. on Nov. 16 and 17 will be the production version of the Honda Fit EV, which bowed last year as a concept (pictured) and now will be real wheels that everyone can buy.

The debut of the 2013 Honda Fit is significant because it's the Japanese carmaker's maiden foray into mainstream electric car sales -- a bold, brave move considering the inhospitable market. It has been tough sledding at best for pioneers Nissan and Chevrolet as they have survived but not thrived as they've trudged uphill in carving a niche for themselves with their Leaf and Volt electric cars.

This new electric-powered Fit will be a 2013 model that will likely be available for purchase sometime in 2012, based on this intro date. The CR-V, which has gotten much more attention from the industry, should be in dealer showrooms by New Year's Day.

The CR-V is a risk only in that previous generations have been wildly popular. The CR-V as a rule has sold very well, and messing with that success with the revamping will either elevate Honda's status or start the same kind of skid Burger King saw when it first changed the taste of its fries. Later, you'll recall, BK did an about-face to save face and brought the old fries back. The lesson Burger King learned the hard way was: Don't tinker with success. How buyers react to revisions on the CR-V will steer the brand up or down on American soil.

Concept cars ready to be shown off in Cali include the BMW i3, BMW i8, Jaguar C-X16, Volvo Concept You, Land Rover DC 100, Kia GT and Lotus Evora GTE.