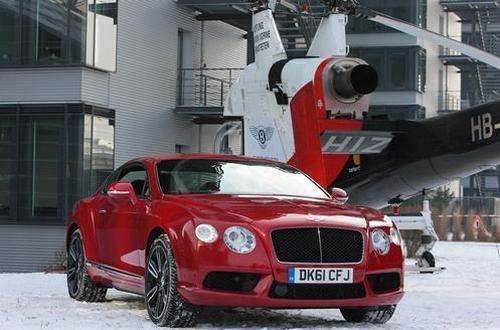 If you are Bentley, an icon of luxury, how do you make your vehicle debuts bigger and badder than the those other luxury automakers? By flying the new 4.0 liter V8 Bentley Continental GT coupe over Munich in a helicopter and putting it on a roof.
Advertisement

That's right, Bentley Motors celebrated the arrival of its new 4.0 liter V8 Bentley Continental GT coupe in Germany. In a sensational display, a a helicopter flew the new Bentley over downtown Munich and placed it on the SkyLounge.

“A dramatic car got the debut we felt it deserved and we took a little bit of our inspiration from Bentley’s iconic ‘Winged B’ emblem. On a practical level the helicopter was the fastest way to get to the rooftop podium.” Klaus Becker, General Manager of Bentley Munich, who organized the show-stopping helicopter lift commented:

Anyone trying to get through the rush hour traffic in downtown Munich would have seen the bright red Bentley taking a dramatic short-cut through the German city. Not on the streets of course, but in the ksy. The Bentley was suspended beneath a helicopter, to beat the traffic jams. Wouldn't you love to do that?

The new V8 Bentley Continental GT coupe arrived at a specially-designed podium at the summit of a high rise complex close to Munich’s city center. The building was the fashionable SkyLounge, which is positioned in a glazed bridge between two skyscrapers. This was an ideal venue for the exclusive Bentley Continental V8 launch party. Around 300 guests were invited and obviously you were not getting in unless you were a VIP.

If you are interested in know what a “Flying Bentley” looks like, you can easily. That is because Bentley has posted a video of the grand production online, in a Youtube video. (Let's be honest, it would have been stupid not to!) I have posted it below for your viewing pleasure.

You sort of wonder what the Bentley bean-counters, insurance agents, and even other executives thought when Mr. Becker pitched this idea of a “Flying Bentley” over downtown Munich. I could only imagine all the things they told him would and could go wrong. I certainly would be worried about the car dropping onto unsuspecting pedestrians. I am sure they procured a good helicopter pilot and made the arrangements carefully. I bet they all thought Mr. Becker was crazy, but it makes for a pretty original debut for a vehicle.