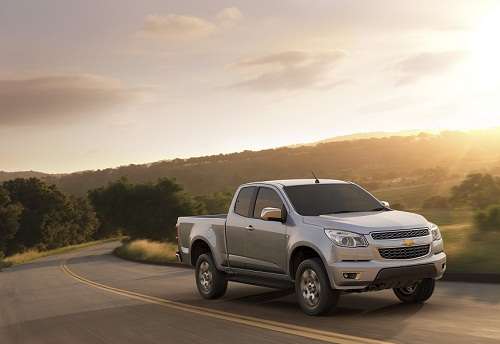 Today, Chevrolet introduced an all-new, clean-sheet, global 2012 Chevy Colorado in Thailand. The Colorado mid-size truck is the product of a five-year, $2 billion vehicle program that was developed across five continents for customers in more than 60 markets.
Advertisement

The new 2012 Chevy Colorado offers all new exteriors, interiors and mechanical features and is the most extensive mid-size truck program in Chevrolet’s 100-year history.

Thai customers can choose among 26 combinations of Colorado models, powertrains, cabins, and ride heights when the vehicle goes on sale this month. The truck will be offered in single-, extended- and crew-cab bodies in high- and low-stance configurations, wide- and narrow-body options, as well as two- and four-wheel-drive configurations.

“Thailand is excited to be the first market in the world to introduce the all-new Colorado, which represents GM’s most significant play in the midsize pickup truck market ever,” said GM Thailand President Martin Apfel.

Chevrolet Colorado, based on GM’s global body-on-frame, rear-drive midsize truck architecture, can be configured to serve a range of customer needs as a commercial vehicle, a family utility truck, or a lifestyle statement.

“Our objective from the beginning of the program was ‘haul anything, go anywhere’ – and that’s exactly what the new Colorado delivers,” Merkel said.

“That versatility is a big win for our customers. Regardless of configuration, they’re getting the features of a common frame and body structure, high-performing powertrains and outstanding refinement. There are no sacrifices in fundamental hardware or aesthetics, from a very basic two-door work truck all the way up to a premium crew cab.

The development of the all-new Colorado was led by GM engineers in Brazil, who tailored the vehicle for a number of global markets, including those in Southeast Asia. They lived in Thailand during the truck’s development to observe the market, which led to the development of three specification levels: the entry-level LS, mid-range LT and range-topping LTZ.

With two levels of chassis and suspension tuning, the new lineup delivers ride and handling characteristics unexpected of a midsize pickup, making it equally adept both at hauling and towing and at serving as a day-to-day city commuter.

The 2.8-liter turbo-diesel features a variable-geometry turbocharger for optimal power and efficiency across the rpm band and a balance shaft for greater smoothness, while both engines feature components designed to last for 240,000 kilometers/149,000 miles.

The pickup was designed in Sao Paulo, Brazil. It takes cues from the three Colorado concept vehicles revealed at global auto shows in Thailand, Argentina, Australia and Germany throughout the year.

A power dome in the hood, combined with a raised cowl, is intended to give the Colorado a strong, purposeful appearance. Higher-mounted dual projector headlamps are positioned beneath the power dome, intended to emphasize visual strength in the face of the vehicle. Also prominent is the dual-port grille – an unmistakable Chevrolet cue – that carries a three-dimensional grille mesh. Chrome appointments in the grille surround, door handles, tailgate handle, mirror caps, and headlamps and fog lamps on high-level models are intended to provide a premium appearance. The 2012 Chevrolet Colorado offers LED-illuminated tail lamps on high-level models, a first for a Chevrolet pickup.

Convenience features like auxiliary power, auxiliary plugs and USB connectivity are standard across the range.

GM has not announced that the 2012 Chevy Colorado truck will be available in the U.S. The automaker has said that more markets and production sites for the vehicle will be announced in the coming months.