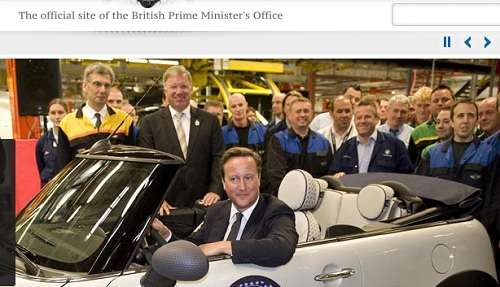 Ten years ago, in 2001, the German automobile manufacturer, British Motor Corporation (BMW) began producing the MINI as one of their automotive marques. Just few days ago, UK Prime Minister David Cameron drove the two millionth MINI Cooper convertible off the production line from the plant in Oxford, the Downing Street reports.
Advertisement

BMW, which specialises in small cars, created the Mini as a specifically small car, which was originally known as the Morris Mini-Minor. It was also known as the Austin Seven and was launched by BMW in 1959, and developed into a brand including other small vehicles such as the Clubman, Traveller and Moke.

The original Mini was a two-door version of what the car is currently. It began to develop in 1995 into the new generation of the car which was launched in 2001. Today, the first generation Mini Hardtop/Hatch (2001-2006) includes many more models.

Prime Minister, Cameron was honored with being asked to drive a MINI Cooper convertible with special paintwork and extras, off the plant in Cowley; home to the creations of the Minis since 2001. A press release was written to announce the grand event.

In the press release, Cameron was quoted as saying, "It's a real privilege to drive this true British icon off the production line today. The 2 millionth MINI to be made here in Oxford is a fantastic symbol of the UK's strength in the global automotive industry and a great British manufacturing success story. MINI is not just a symbol of our industrial past, but also the great industrial future we want to build."

A member of the Board of Management of BMW AG who is responsible for Production, Frank-Peter Arndt stated, “Production of the two millionth MINI comes on the back of strong demand worldwide. Our recent announcement of an additional £500 million investment in our UK MINI production facilities demonstrates the important role that Oxford plays in our global production network. The most essential factors in the success of MINI are the skills, passion and dedication of our associates."

The Mini brands success has been apparent as shown in the positive developments since 2011 at the plant in Oxford. Having Prime Minister David Cameron drive the MINI Cooper convertible off the plant was a great way to celebrate.

Jürgen Hedrig, head of Plant Oxford said: "This marks a tremendous milestone for Plant Oxford and its employees. Oxford has been the heart of MINI production for ten years. Our employees are proud to be part of this brand's success."

Julia wrote on September 6, 2011 - 3:15pm Permalink
Is BMW really the British Motor Corporation? I always thought it stood for Bayerische Motoren Werke - but I could be wrong all these years.