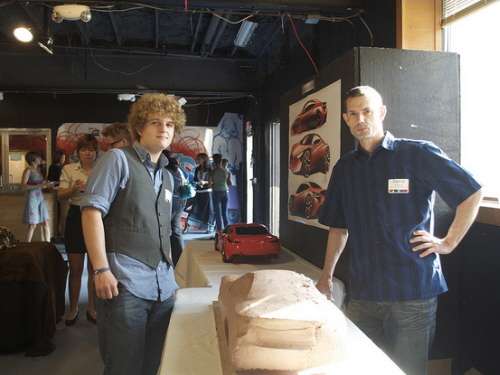 The project was made possible in part with $20,000 in funding from Toyota and Calty Design Research of Ann Arbor, which also provided design assistance. Calty works with Toyota to design the look of cars like the 2012 Toyota Venza.

The renovation project was a collaboration between teens from Neutral Zone who run the visual arts department and a variety of volunteers from businesses in Washtenaw County, west of Detroit's downriver suburbs.

Nearly everything, including things like cabinetry donated by Masco, was given to the teens for free or was discounted, from businesses in Washtenaw County. Mary Jane O’Brien from Carpenter Guy supervised construction. Teens did most of the manual labor.

“The new visual arts studio would not have happened without the support and funding provided by Toyota and Calty,” said John Weiss, executive director of Neutral Zone. “The professional quality of the newly designed space is going to better support the teens in our community as they pursue their interest and passion in art.”

The Neutral Zone provides teens in the Ann Arbor area with an after-school drop-in space, weekend concerts and more than 20 programs in leadership, education, literary arts, music and visual arts.