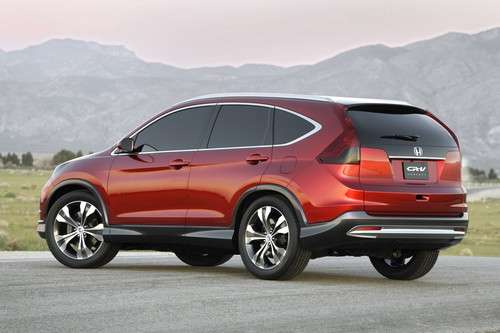 Honda has invited the auto press in Detroit to road test the all-new 2012 Honda CR-V sport-utility vehicle on Nov. 10 at the Baronette Renaissance Novi Hotel. Reporters from TorqueNews.com and others will be given an exclusive briefing and an opportunity to drive the 2012 model.
Advertisement

Now completely transformed and heading into its fourth generation, the 2012 Honda CR-V is moving toward a more sophisticated direction with refreshed styling, improved fuel economy, innovative technology and even greater value for the money, Honda believes.

Honda wants auto critics to see for themselves "how Honda has made the benchmark for packaging and user-friendly design in the small SUV segment even better."

Members of the 2012 CR-V R&D team and American Honda product planning executives will be at the briefing in the northwest Detroit suburb to explain the CR-V development story and provide insight into Honda's sales and marketing plans.

Driving begins for the first group of reporter drivers at 10 a.m. and the second wave will be on the streets of Novi near the hotel in Oakland County at 2:30 p.m. Reporters who go to the event will not be able to share their impressions with readers until Nov. 16 because of an embargo asked for by Honda.

The all-new 2012 CR-V will have a new look inside and out, a more fuel-efficient engine and will be lighter.

Honda's big sell is the CR'V's solid track record. From 2007-10 the CR-V was the best-selling SUV in America.

The current CR-V continues to sell at a record pace and quality of one of the reasons. The 2011 CR-V was among the highest-ranked vehicles in its segment for initial quality in J.D. Power & Associates' 2011 Initial Quality Study and has been sold globally in more than 160 countries in North America, South America, Europe, Asia and Africa.

It is assembled in Ohio at the East Liberty Auto Plant of Honda of America Manufacturing Inc. The plant earned a Silver Award for outstanding quality in the quality study.

The 2012 model will be in showrooms by Christmas after making its official debut in November at the Los Angeles Auto Show. A concept model (pictured) made its world debut at the Orange County Internarional Auto Show in California.

Tesla Giga Berlin's New Hurdle: It's Not Only the Gov't, but Now Tesla Itself
Teslas Are Sold Out Until 2023, But The Timing May Reverse
END_OF_DOCUMENT_TOKEN_TO_BE_REPLACED