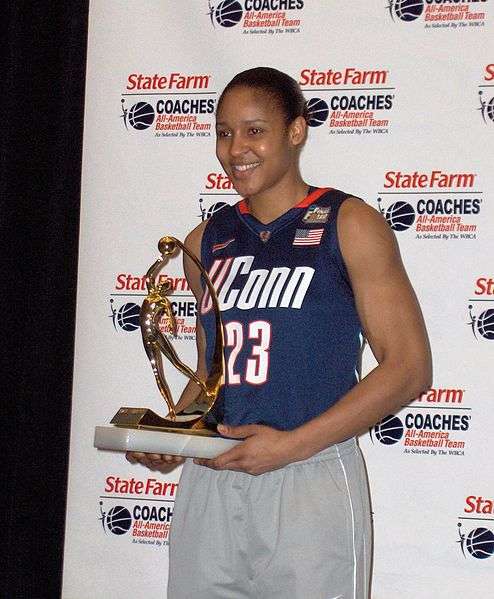 University of Connecticut basketball player Maya Moore (pictured) won the Honda-Broderick Cup today, making her America's best female college athlete of 2011. She is the first to win the high honor two years in a row. Moore, who now plays for the Minnesota Lynx of the WNBA, beat out other finalists Blair Brown, a Penn State volleyball player, and Sheila Reid, a cross country and track and field standout from Villanova.
Advertisement

Moore, a 6-foot forward from Lawrenceville, Ga., was the WNBA's first draft choice this year. She led UConn to four Final Four appearances, two national titles and a 150-4 record (including 90 consecutive victories) and this past season averaged about 23 points and 9 rebounds per game. She is the fourth-leading scorer in NCAA history, an academic All-American of the Year and Big East Scholar-Athlete of the Year in 2010 and 2011. Her grade-point average is 3.669 in sports media and promotion.

The selection of Moore, who is averaging about 14 points per game with the Lynx, was made today by the Collegiate Women Sports Awards board of directors at a ceremony at Columbia University in New York. The finalists were chosen from previously announced Honda Sports Award winners in 12 different NCAA-sanctioned sports.

She had tough competition. Brown, from Purcellville, Va., led Penn State to its fourth NCAA championship title in a row as team captain, scoring 18 kills in the national title game. She is a three-time All-American, Big Ten Player of the Year and made the NCAA Championship All-Tournament Team. Brown had 521 kills in 2011 and graduated from Penn State with a bachelor's degree in English and political science.

Villanova's Reid, from Newmarket, Ontario, in Canada, is the NCAA outdoor champ in the 1,500- and 5,000-meter races. She is the first woman ever to win both events in the same year. She also is the indoor national champion in the distance medley, is an All-American in the 3,000-meter event and finished 2011 as the Big East indoor titlist in the 1,000-meter, 4x800-meter relay and distance medley relay. She has a GPA of 3.408 with a major in English.