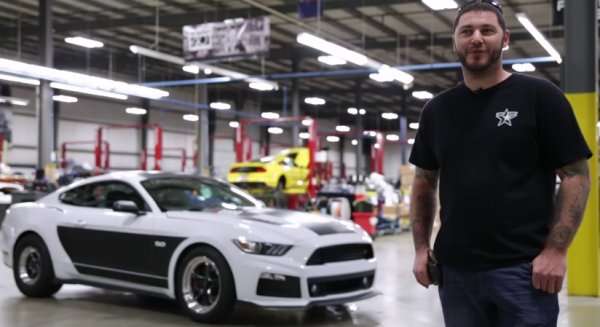 We talk a great deal about records set by the various Dodge Hellcat Challengers and Chargers because I am heavily involved in the Hellcat and Mopar performance communities, but I don’t mean to exclude records set by the folks driving other performance vehicles. Last night, a friend sent me this video showing a late model S550 (2015+) Ford Mustang GT which is said to be the quickest manual transmission S550 Mustang in the world.

Now, I don’t know for sure that there isn’t another 2015-2017 Ford Mustang with a 6-speed manual transmission that has run a quicker quarter mile time, but I can say that I haven’t seen proof of a quicker car with this gearbox. Also, the fact that this video was put together by the go-fast experts at Roush Performance leads me to believe that this is a legit claim, as they wouldn’t want to advertise something that wasn’t true.

In short, if there proves to be a quicker manual transmission S550 Mustang out there and I find out shortly after this piece goes live, I will make a note of that in the piece – but right now, I believe this Mustang to be the quickest of its kind in the world.

The Record-Setting Roush Mustang
The 2015 Ford Mustang GT in the video below is owned and driven by Paul Ferdinando, who has taken his Roush-modified Mustang from a simple showroom car with an aftermarket performance package to the quickest manual transmission S550 Mustang in the world. Most impressive is the fact that his modification list is fairly short.

On top of the Roush Phase 1 package, Paul Ferdinando upgraded to the more powerful Phase 2 kit in 2015 Mustang GT, along with new injectors, a 125 horsepower nitrous kit, a methanol injection setup and a good tune – all of which lifted the output of the 5.0L V8 up to the range of 850-900 horsepower, depending on the size of the nitrous jets installed for a given quarter mile pass or dyno pull. Paul’s Mustang also has skinny wheels/tires up front for less weight with fat wheels and sticky tires out back for the best possible traction. There is also clearly a 2-step controller helping with the launch, which you can hear when he leaves the line on the record run.

The result of all of these modifications on this Roushcharged 2015 Ford Mustang GT is a modern muscle car with a manual transmission that will blast down the quarter mile track in 9.47 seconds with a speed of 149.07 miles per hour.

So, until we hear of a quicker 2015+ manual transmission Ford Mustang, crank up your speakers and enjoy the world’s quickest MT82 Mustang in action in the video below.

Steve wrote on December 20, 2016 - 8:47am Permalink
Really nice car, I've seen where the axles are also beefed up for extreme duty, this article doesn't mention that, were the stock axles used? If not it would seem there isn't a reason to put stronger / heavier axles on the back to handle higher output from the engine.

Tsingshan's Threat to Tesla: EV Maker Is In Battery Crosshairs
Tesla-Funded Research Reveals One of The Biggest Mysteries of EV Battery
END_OF_DOCUMENT_TOKEN_TO_BE_REPLACED