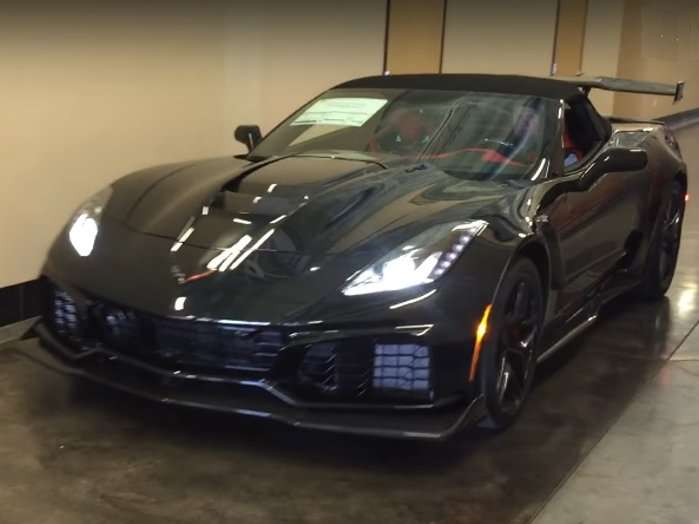 Production of the 2019 Chevrolet Corvette ZR1 began earlier this month and with Rick Hendrick having paid nearly a million dollars for the rights to the first example of the 755 horsepower supercar, C7 ZR1 #0001 was built to the desired specifications of the legendary NASCAR team owner.
Advertisement

A few months back, the rights to own the first 2019 Chevrolet Corvette ZR1 retail unit was sold to the highest bidder at a Barrett Jackson auction. That high bidder was NASCAR owner and hardcore car collector Rick Hendrick, who paid $925,000 to claim the first C7 ZR1, so when production began earlier this month, his Corvette was the first to come off of the assembly line.

The First C7 ZR1
As you can see in the video below, Rick Hendrick ordered his 2019 Corvette ZR1 as a convertible with black paint, a black top and Carbon Flash painted wheels. This car has the top-of-the-line 3ZR package with the Jet Black and Adrenaline Red interior, the suede-wrapped interior trim package, the Competition seats, red seat belts, the Performance Data Recorder and the 8-speed automatic on the inside, while the outside features the aero bits of the Track Performance Package, the Carbon Fiber ground effects package, a carbon fiber hood, black badges, red brake calipers and the performance exhaust system.

In other words, Hendrick basically picked every option that he could, getting the most for his money and creating one of the most heavily-appointed C7 Corvette ZR1s possible.

After Hendrick’s 2019 Corvette ZR1 rolled off of the assembly line, it was driven through a fairly narrow hallway and out into the open air, where the NASCAR team owner posed for pictures with his 755 horsepower supercar. After the photo-op, Hendrick and some of his crew spent some time making laps around the road course of the National Corvette Museum Motorsports Park, but he did not get to take his Corvette home.

Like every new Corvette ZR1, Hendrick’s supercar had to go through a rigorous quality control process that takes roughly two weeks, but with the first batch of LT5-powered Chevy supercars having been shipped, this car might be parked in the garage with the first C7 Stingray and the first C7 Z06 – both of which are also owned by Rick Hendrick.

LG's New EV Battery Plant Is a Welcome News for Tesla
Tesla Giga Berlin's New Hurdle: It's Not Only the Gov't, but Now Tesla Itself
END_OF_DOCUMENT_TOKEN_TO_BE_REPLACED