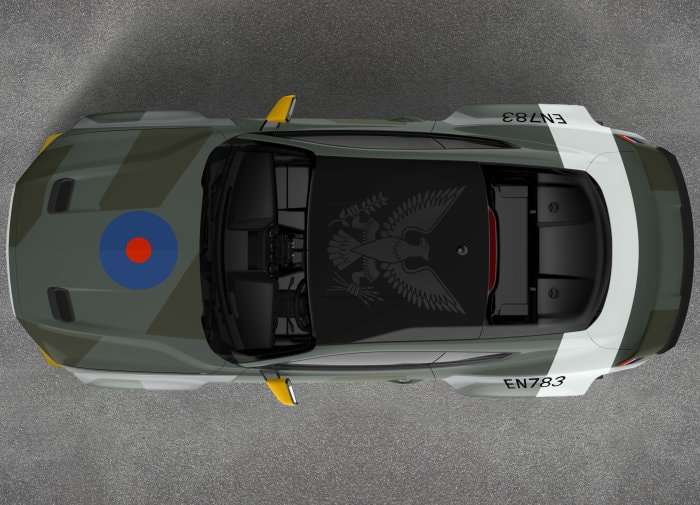 For the 11th straight year, Ford Motor Company has designed an aeronautical-themed Mustang to be auctioned off as part of the annual Experimental Aircraft Association (EAA) AirVenture event in Oshkosh, Wisconsin, but before this car is sold to the highest bidder – drift champ Vaughn Gittin Jr will drive the car in this year’s Goodwood Hill Climb.
Advertisement

Starting back in 2008, Ford Motor Company has produced a unique, aircraft-themed vehicle to be auctioned off for the Young Eagles charity at the annual EAA AirVenture Oshkosh, Wisconsin. In the previous ten years, the company has donated nine custom Mustangs and a custom F-150 Raptor, all of which have worked together to raise more than $3,000,000 for the group. These vehicles feature a custom exterior and a long list of performance upgrades, so in addition to helping a good cause, the bidders are competing for a one-of-a-kind, high performance car or truck.

For the 2018 EAA AirVenture event, Ford Performance has teamed up with Vaughn Gittin Jr and his brand RTR Vehicles to create the most unique and highest performance aircraft-themed charity car yet and it is named the Eagle Squadron Mustang GT.

“Supporting young pilots through the EAA charity auction reflects Ford’s aviation history, tracing back to the company’s early days and the Arsenal of Democracy during WWII,” said Darrell Behmer, Ford Mustang design chief. “The Eagle Squadron Mustang GT build with Vaughn and the Ford design team is a great way to honor our heroes and keep the spirit of aviation alive for the next generation of American pilots.”

The Mod List
On the outside, the Eagle Squadron Mustang GT has a carbon fiber widebody kit from RTR Vehicles with an eye-catching livery that pays tribute to the American fighter pilots who served in the Royal Air Force during World War II. We only have the one picture shown above right now, but we can bet that this muscle car looks like a fighter plane from every angle.

To help this pony fly, Ford installed a supercharger package that lifts the engine output to 700 horsepower while a suspension package from Tactical Performance improves handling while also giving the car a menacing stance.

Finally, in addition to getting this cool Mustang GT, the winner of the charity auction also gets an all-expenses paid trip for two to the 2018 Woodward Dream Cruise in Detroit, where the car will be presented.

Stop in Goodwood
Since this car is built to honor American soldiers supporting Great Britain in World War II, drift champ Vaughn Gittin Jr will debut the car at the Goodwood Hill Climb on July 12th. Goodwood draws some of the most incredible performance cars in the world, with well-known drivers working to see how quickly they can cover Lord March’s driveway.

The Eagle Squadron Mustang GT will fit right in amongst the other high performance machines before heading to Detroit for its delivery to the new owner.

Elon Makes a Cybertruck Statement With an Action, But Quiet in Words
Tesla's Record Month in China: Doubled Registrations in March 2021
END_OF_DOCUMENT_TOKEN_TO_BE_REPLACED