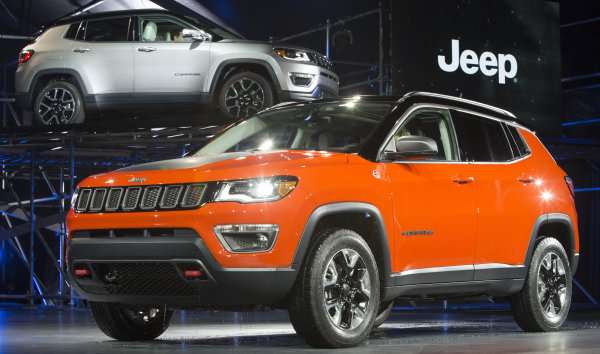 The US Spec 2017 Jeep Compass Debuts in LA with One Engine, New Trailhawk Trim

We have already seen the 2017 Jeep Compass thanks to its Brazilian introduction, but with the start of the 2016 LA Auto Show, we get our first look – and the first details – on the new compact SUV which will be sold in the USA.
Advertisement

Back in September, FCA had an event to celebrate the start of production at the plant in Brazil which will build the 2017 Jeep Compass, but we really only got to see the new SUV back then. Those images told a very pleasant story about the new exterior design, but we didn’t know anything about the nuts and bolts of the 2017 Compass headed for Jeep dealerships in the USA.

Click here for a closer look at the 2017 Compass information from earlier this year.

Now that the LA Auto Show has opened and the 2017 Jeep Compass in US-specifications has been officially unveiled, we have a much clearer picture of this new compact SUV from every angle.

Drivetrain of the 2017 Jeep Compass
The 2017 Jeep Compass will be offered with 17 different powertrain options around the world, but here in the United States, the Compass is available with only one engine, but there are three transmission options.

The standard engine for the American Jeep Compass is the 2.4L Tigershark 4-cylinder engine, which delivers 180 horsepower and 175lb-ft of torque – up 8hp and 10lb-ft of torque over the current Compass engine. Surprisingly, the 1.4L MultiAir turbocharged engine from the smaller Jeep Renegade is not offered and, contrary to some rumors, there is no mention of the powerful “Hurricane” engine.

No official fuel economy numbers are available yet, but FCA expects a highway number of at least 30mpg – although that is likely for the front wheel drive model. In any case, this new Compass will be more powerful and more efficient than the outgoing models – while also being much better looking and more capable in terms of off-roading abilities.

The Compass Trailhawk
New for 2017 is the Jeep Compass Trailhawk, which will be the most capable of the lineup when it goes on sale. This package adds package specific exterior appointments, a unique suspension setup with Koni dampers and a beefier wheel and tire package – all of which work together to afford the Compass a 30 degree approach angle and a 34 degree departure angle. The Trailhawk package also comes with Hill Descent Control and a special version of the Selec-Terrain system with Rock Mode.

The 2017 Jeep Compass Trailhawk will likely be the most capable small Jeep and it will almost certainly be more off-road capable than anything else in the segment. At long last, the Compass should be able to live up to the legendary Jeep off-road heritage.

We still don’t know for sure when the 2017 Jeep Compass will go on sale in the US, nor do we know how much it will cost, but there is no question that this miniature Grand Cherokee will be more popular with buyers than the current version.