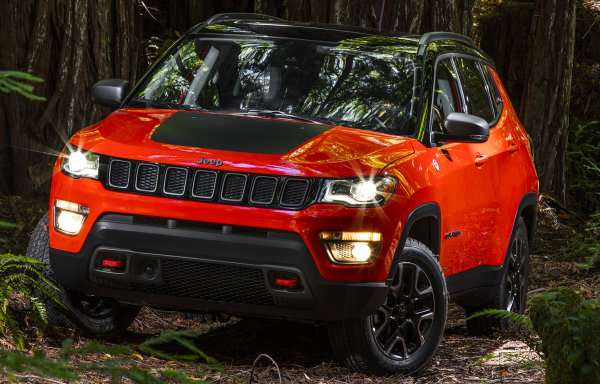 FCA introduced the all-new Jeep Compass in Brazil yesterday at the plant which will handle production for much of the world, but with the expectation of different drivetrains in different markets and no specific information from the automaker for the US market, all we really know about the new small Jeep is that it looks very nice inside and out.
Advertisement

The 2018 Jeep Compass isn’t set to debut here in the United States until the LA Auto Show in November, but FCA introduced the new small sport utility vehicle yesterday afternoon at the production facility in Goiana, Pernambuco, Brazil. This debut coincided with the start of 2018 Compass production and with the Brazilian market getting the new SUV first, there is all sorts of information on the new Jeep on their local consumer website.

However, with a promise of 17 different powertrain options for the various markets around the world, there is a good chance that Americans will get different engine options than Brazilians. FCA did issue a press release on the 2018 Compass with a few pictures, but they didn’t offer any specifications at all, so when combined with the expectation that the American Compass will differ from the Brazilian Compass, we don’t know for sure what will be under the hood.

Fortunately, we don’t need specs to know that this new 2018 Jeep Compass is a great looking machine and while we don’t know official powertrain details, we can make some guesses based on the other drivetrain options in the US market.

2018 Jeep Compass – 2017 Jeep Grand Cherokee Inspire
As pretty much everyone expected, the new Jeep Compass has styling similar to the hot-selling Jeep Grand Cherokee. Jeep took a “little Grand Cherokee” approach with the previous generation (2016) Compass and it was a huge improvement over the bug-eyed early Compass (circa 2008), but this new Compass is far sportier and far more modern than the outgoing models.

Really, if you glance at the picture above of the 2018 Jeep Compass too quickly, you might mistake it for a uniquely painted Jeep Grand Cherokee. When comparing the faces of the new Compass and the current Grand Cherokee, there are a handful of similarities that make this smaller Jeep so handsome. The LED-trimmed projection headlights have a similar shape. There is a 7-slot grille in the middle with three cooling slots below, just like the 2017 SRT Jeep. Flanking those three cooling slots is a fog light/signal light area and, on the Trailhawk model shown here, red tow hooks are integrated into a black contrasting lower fascia.

We can also see that the 2018 Jeep Compass Trailhawk has some sporty wheels for this premium off-road package and out back, this new small SUV gets high tech LED taillights and an overall form that definitely mimics the Grand Cherokee.

The Grand Cherokee is the most awarded SUV ever and creating a new smaller Jeep with similar features that actually work seems like a sure-fire recipe for success. This new Compass wears the Grand Cherokee-like design very well and based purely on appearance – this new SUV should be far more popular than the outgoing Compass and Patriot.

On the inside, the 2018 Jeep Compass will have an interior that is very much like the Grand Cherokee, including the 3-spoke steering wheel and the huge 8.4” UConnect infotainment system.

What About the Drivetrain?
There is no information from FCA pertaining to the drivetrain of the US-bound 2018 Jeep Compass and with the grand debut planned for the 2016 LA Auto Show later this year, we will likely be waiting a few weeks for the full information on the Compass that will be offered in our local dealerships. However, we can make some guesses based on the other models sold in the US, with some of the features being little more than common sense.

In terms of the engine lineup, it seems likely that the 2018 Jeep Compass will share the engine options with the Jeep Renegade, including the 1.4L turbocharged 4-cylinder and the naturally aspirated 2.4L 4-cylinder. There is also the possibility that the long-rumored “Hurricane” turbocharged engine family will find its way into the next generation Compass, but in terms of a high volume engine – look for a refreshed version of the current 2.4L mill to handle the bulk of the work.