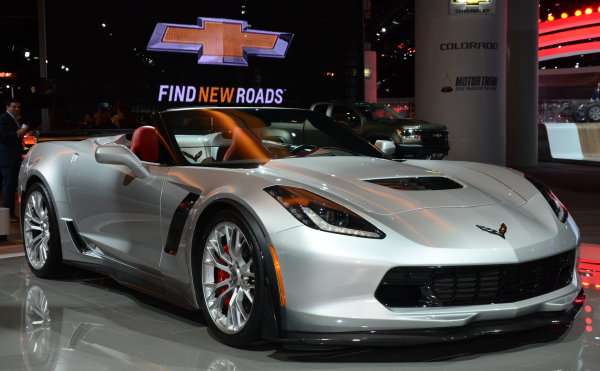 The C7 Chevrolet Corvette Stingray officially went on sale for the 2014 model year back in October of 2013, so with the new Corvette beginning its 3rd year of sales, we wanted to take a look at the first two years of sales figures for the newest generation of the all-American sports car.
Advertisement

Several years back, on a cold, wet and windy night in Detroit, I joined a group of thousands of people who got to be among the first to see the C7 Chevrolet Corvette in person. GM reincarnated the Stingray for the 2014 model, but they also introduced a new taillight design that was instantly the cause of much fuss from the Corvette faithful. Some of these critics insisted that this simple change to the rear of the C7 Corvette would lead to poor sales, but those folks have been proven wrong since the Stingray first went on sale and while the negativity around the new square taillights has faded a bit – there are still people complaining about the new rear end.

Fortunately for General Motors, the few people who dislike the C7 Stingray have been heavily overshadowed by the sales success over the past two years and as the “new” Corvette enters its third year of sales, Corvette sales have remained strong from a car that some insisted was doomed to fail.

2 Years of Corvette Stingray Sales
The 2014 Chevrolet Corvette Stingray officially introduced the C7 to the dealership world back in October of 2013 and in that first month, GM sold 3,929 examples of the C7 Corvette Stingray. That figure has not been bested over the past two years, but over the course of the past 25 months (October 2013 – October 2015), GM has only sold less than 2,500 Corvettes 5 times – and a few of those were only a couple dozen units under 2,500.

During the first full year of sales in 2014, the strongest sales month came in December when 3,552 new C7 Corvette Stingrays were sold and the worst month in 2014 was in January, when just 2,261 Corvettes were sold. During the course of 2014, GM sold 34,839 Corvettes – more than twice the number of Corvettes sold during the final year of the C6.

Finally, during the 2015 calendar year, with the first ten months adding into the first two years of the C7 Corvette, the Stingray sales peaked in March, when 3,785 units were sold while the worst month during the first ten of 2015 came in January, when just 2,127 new Stingrays were sold. It should be noted that in November 2015, C7 sales hit an all-time low with only 1,952 units sold, but in adding up the first two full years – from October 2013 to October 2015 – the sales numbers have been consistently strong.

During the first ten months of the year, GM sold 28,924 new Corvettes and when added to the numbers from 2013 and 2014, GM has sold 73,224 Corvettes since the C7 Stingray went on sale. Only the Chevrolet Camaro, Ford Mustang and Dodge Challenger have sold more 2-door models over that same period of time and among premium performance cars – no car sold in America has come anywhere close to the Chevrolet Corvette Stingray.