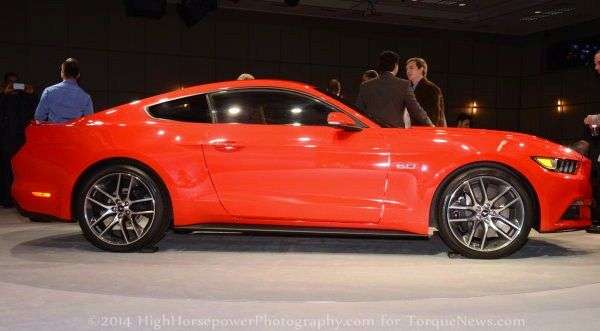 Steeda Autosports seemingly dropped some bad news about the 2015 Ford Mustang recently when they claimed that it would be 200-300 pounds heavier, but the Mustang accessory gurus have since clarified that those figures are based solely on their best guess – meaning that this weight increase for the S550 Mustang is anything but official.
Advertisement

Steeda Autosports is well known in the performance industry for their work on many generations of the Ford Mustang so when they posted a piece about their plans for the 2015 Ford Mustang on their website, people took notice of what was said. In addition to Steeda stating that they will be getting their hands on four S550 Mustang models to begin making high performance components for the popular pony car, the company mentioned that the 2015 Mustang will be gaining 200-300 pounds.

Nowhere in that post by Steeda did they say that they had gotten their hands on a 2015 Mustang and weighed it yet many sources indicated that the tuning company had indeed gotten early access to a new model to find out the actual weight. To me, it sounded like Steeda had inside information on how much the new Mustang would weight…but in any case, the company has since posted on Mustang6g.com to clarify their views on the weight of the next generation Mustang.

Seth from Steeda posted “Based on our experience working with IRS mustangs in the past we estimated what the weight addition will be. In addition current industry trends with new cars show additional weight being added for various new safety and comfort features.”

Whoever wrote the blog post stating the weight gains for the 2015 Ford Mustang was simply using estimated figures based on the weight of previous Mustang Independent Rear Suspension systems – presumably in the likes of the “Terminator” SVT Cobra. Some of the publications that are covered this initially are insisting that Steeda is backpedaling on their comment, but to me it sounds like they are simply explaining how they came up with those numbers.

In any case, this means that Steeda really doesn’t know how much the new Mustang weighs. They are simply making a guess and due to the fact that the aftermarket tuner is so well respected in the industry, many people took it as fact. Steeda believes that between the change from a solid rear axle to the new independent rear suspension system and the added safety features, the new Mustang will pick up between 200 and 300 pounds over the current (2014) models. That makes some sense, but their vague comment only seems to take into account the new features that add weight and not those features which reduce weight.

Ford is obviously on a weight reduction kick – which is so clearly proven with the 2015 F150 – so it seems to make sense that the company would put the same amount of weight saving efforts into their legendary sports car as they do their hard working pickup truck. The company has been quick to talk about the weight of the new F150 and while FoMoCo has talked about all sorts of information pertaining to the new Mustang, they have avoided the topic of weight. The 2015 Mustang is a little bigger, it has more features (that add weight) and it has a new rear independent suspension system that also adds weight so – in theory – the S550 Mustang platform could be heavier than the current S197 platform.

However, I still have a very hard time believing that Ford would increase the weight of the 2015 Mustang even with those new features simply because of the broad negative impact felt from adding almost 10% more weight to a high performance car like the Mustang. Unfortunately, all that we can really do is sit and wait until Ford Motor Company decides to roll out all of the numbers on the next generation pony car.