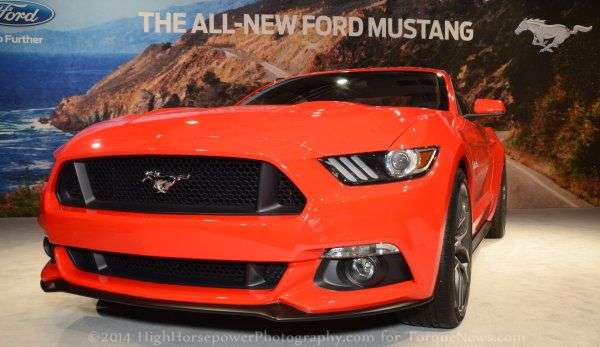 According to Mustang aftermarket gurus Steeda Autosports, the 2015 Ford Mustang curb weight has increased by 200- to 300 pounds – although no detail has been offered as to which components caused this very significant curb weight jump.
Advertisement

In the world of the performance car, weight reduction is one of the hottest topics after only engine output and it has been widely expected that the new 2015 Ford Mustang would weigh less than the 2014 models in showrooms around the country right now. However, according to well known Mustang tuner Steeda Autosports, the next generation Mustang has packed on an extra 200 to 300 pounds over the new Mustangs on sale today. It is unclear where Steeda acquired this information – and it should be noted that Ford Motor Company has offered up no official weight information on the 2015 Mustang – but I find it hard to believe that Steeda would announce that the new Mustang was heavier without having a very reputable source. After all, an increase like that would be harmful to performance in both a straight line and around a road course while also negatively impacting the fuel economy figures.

The Ford Mustang has had a significant weight advantage over the Camaro since the Chevy muscle car was re-introduced for the 2010 model year, but should this information be correct, that advantage could be gone. The 2014 Ford Mustang GT coupe with the 6-speed manual transmission weighs 3,618 pounds so an increase of 200-300 pounds would bring about a 2015 Mustang GT curb weight of 3,818-3,918 pounds. The 2014 Chevrolet Camaro 1SS with the manual transmission weighs 3,908 pounds so if the information from the folks at Steeda proves to be true, the 2015 Mustang could actually weigh more than the current Camaro SS.

More importantly, General Motors has shown that they know how to lighten up a car with the introduction of the 2014 Chevrolet Corvette Stingray and the Camaro Z/28. Based on those two models, I expect that the next generation Camaro that will arrive for 2016 will weigh less than the current models and if that is the case – buyers who cannot decide between the Mustang and the Camaro could lean towards the Chevy.

The 2015 Ford Mustang is all new, so it is hard to guess which features would add 200-300 pounds. We know that there are more moving parts under the rear end of the car with the new independent rear suspension setup as well as some more features in the cabin, but it is hard to imagine that these features – combined with the new chassis – would add so much weight. With the increased used of high strength steel technology in all of their vehicles, I would really be surprised if Ford didn’t find a way to lower the weight relative to the current S197 models, but stranger things have happened.

Again, this information isn’t official, but this information is fairly disappointing and I have a hard time believing that Steeda would post that on their website without being absolutely sure. Order banks for the 2015 Mustang opened in the US two weeks back while European buyers got a chance to order the first 500 units last weekend. Considering that people are already laying down money for the S550 Mustang and deliveries are expected to begin within the next few months, Ford will most certainly be rolling out the full specs on the 2015 Mustang very soon. When those official numbers hit, I’m hoping that the folks at Steeda got some bad information and that the new Mustang is not heavier…although if it is, I’m sure that Ford will have made the moves to ensure that the 2015 Mustang offers better straight line performance, better handling and better fuel economy than the outgoing models.