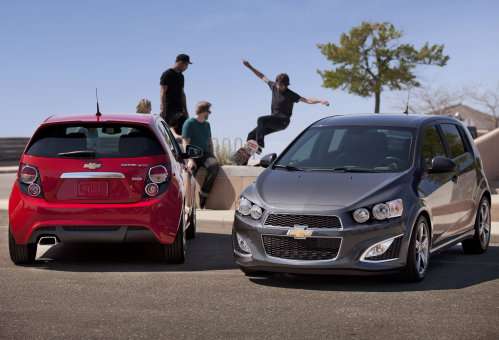 General Motors has announced the pricing of the 2013 Chevrolet Sonic RS and the sporty 5-door hatchback fitted with a turbocharged engine, a 6-speed manual transmission and a slew of physical changes inside and out starts at just $20,995 including the $795 destination fee.
Advertisement

The 2013 Chevy Sonic RS sits atop the lineup of available trimlines for the compact and efficient 5-door hatchback, joining the LS, LT and LTZ trimlines with a price of $20,995 when equipped with the manual transmission or $22,280 for the 6-speed automatic transmission models. This performance minded model is powered by the turbocharged 1.4L Ecotec engine that sends 138 horsepower and 148lb-ft of torque to the front wheels. This is the same engine offered as an option in the Sonic LT and Sonic LTZ but to improve the performance capabilities of this new trimline – the Sonic RS manual transmission is equipped with unique gearing to improve acceleration.

GM didn't stop with the performance improvements with the turbocharged engine and the specially geared 6-speed manual transmission; as the 2013 Chevy Sonic RS is fitted with a specially tuned MacPherson strut front suspension system with coil springs and a stabilizer bar while the rear wheels are cushioned with a torsion beam rear suspension featuring a tubular V-shape beam – a setup which allows for stronger handling capabilities without compromising ride quality. The result of the RS model’s specifically tuned suspension system is a ride height 10mm lower than other Sonic models while the 17” aluminum wheels provide a wide, sporty track. Also, the Sonic RS is the only package available with four wheel disc brakes complete with ABS and a brake force distribution system.

In addition to offering a more aggressive, sporty exterior look, a more luxurious interior setting with tons of leather and a performance tuned drivetrain, the 2013 Chevrolet Sonic RS should offer impressive fuel economy for a sport model. The Sonic LT and LTZ with the manual transmission offer 29 miles per gallon around town and 40mpg on the highway while the automatic versions offer 27 around town and 37 on the open road. GM’s statement didn’t mention official fuel economy figures but with the only real difference being the special transmission gearing, the Sonic RS could offer very similar fuel economy figures to those offered by the other trimlines. The special manual transmission gearing could have a great impact on around town fuel economy than highway numbers so it is conceivable that this new sport model of the Sonic could still offer 40 miles per gallon.

On the outside, the 2013 Chevrolet Sonic RS separates itself from the other Sonic trimlines with a unique body dressing including a new RS specific grille, new rocket moldings along the side, a new rear fascia with an integrated exhaust tip, a new rear spoiler, RS badging and the aforementioned 17” wheels. Buyers of the Sonic RS can also opt for an optional power tilt and slide sunroof. The Sonic RS is available in four colors - Victory Red, Summit White, Cyber Gray Metallic and Black Granite Metallic (new for 2013).

Production of the 2013 Chevrolet Sonic RS begins at the General Motors Orion Township Assembly Plant in October with deliveries expected to begin by the end of the year. The Sonic has presented a huge improvement in customer appeal over the Chevy Aveo that it replaced and with the sharper image, there is little question why the Sonic is so much more popular than the Aveo. Adding this new performance model with a low price and what should be excellent fuel economy should only help the American-made Chevy Sonic continue to flourish in the US market.