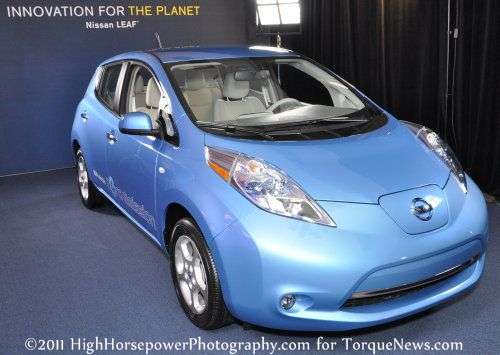 Slow delivery of the 2011 Nissan Leaf could continue

The head to head battle between the 2011 Nissan Leaf and 2011 Chevrolet Volt has been a lopsided one due to the slow delivery of pre-ordered electric Nissans and according to a source from the Japanese automaker, that slow delivery could continue well into the year.
Advertisement

January 2011 brought us the beginning of what could be the year of the electric car and in that first month, the 2011 Chevrolet Volt outsold the Nissan Leaf by a margin of 321 to 87. The curious part is the fact that Nissan took tens of thousands of pre-orders for their electric Leaf and quite a few analysts involved in the automotive industry have cited production delays due to supplier shortages as being the reason for the slow delivery of the Nissan Leaf in the US.

However, according to a report by the Wall Street Journal, the slow delivery of those pre-ordered Nissan Leaf electric vehicles is all according to company plans and it is not due to supplier shortages or production delays of any kind. Also, if these reports prove to be correct, hopefully Leaf owners could find themselves waiting until April before getting ahold of a new electric Nissan.

According to the WSJ, during a discussion with Brian Carolin, senior vice president of sales and marketing for Nissan North America, Mr. Carolin commented that there have not been supplier issues causing production setbacks, but rather Nissan is intentionally dragging their feet to ensure a quality buying experience.

Carolin has been contacting those who have pre-ordered the 2011 Nissan Leaf to discuss the buying and ownership experience of the high tech electric vehicle, checking on things like the progress of a home charging station being installed as without one, charging the Leaf becomes an incredibly slow process. In addition to that, Nissan North America is checking with the dealerships responsible for delivering the new Leaf to make sure that they also have a charging station installed so that there is no risk of sending partially-charged vehicles to the customers.

While those waiting for their 2011 Nissan Leaf might not be interested in Mr. Carolin’s reasons for the lengthy delivery process – this does make sense. If the initial 2011 Nissan Leaf owners are unhappy with their vehicle, it could greatly impact the future sales figures so the Japanese automaker is doing everything that they can to ensure that the early Leaf owners have the tools in place to make the electric vehicle experience a positive one.

Unfortunately, Mr. Carolin also commented that we may not see the 2011 Nissan Leaf arriving in mass numbers until April but even with the slow rollout of the new product, Nissan is committed to delivering 20,000 2011 Leaf electric vehicles by September of this year. Nissan expects to deliver around 100 Leafs in the month of February and while GM hasn’t issued a rough number, we can expect them to outsell the Leaf once again.