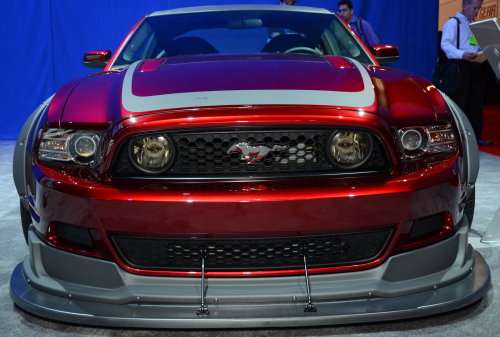 Among the collection of Ford Mustang models at the 2012 SEMA Show was the gorgeous deep metallic red machine shown on the right side but unlike the rest of the Mustangs in attendance that are based on standard V6 or GT models - this is the new RTR Stage 3 Mustang designed by drift racer Vaughn Gittin Jr and modified by the folks at Mother’s.
Advertisement

Like the rest of the modern RTR Ford Mustang lineup, the new RTR Stage 3 shown on the right (click any thumbnail for a closer look) packs a pretty equal amount of modifications inside, outside and under the hood with a flurry of handling goodies to boot but the folks at Ford Racing and Mother’s added a variety of items to make this one mean machine.

Based on the 2013 Ford Mustang GT, the RTR Stage 3 is powered by the 5.0L V8 and a 6-speed but 420 horsepower just wouldn’t be enough for a car of this caliber so a Ford Racing supercharger package, a Magnaflow RTR exhaust system, American Racing headers, an American Racing x pipe, a K&N air intake system and a custom engine calibration by Adam Brown boosts the output up into the neighborhood of 650 horsepower. All of that power is funneled through an Exedy Hyper Twin racing clutch, an RTR/Driveshaft Shop carbon fiber driveshaft and a Currie Enterprises axle package fitted with a Torsen differential and 3.55 gears. When combined with some improved cooling components, the drive train of this RTR Stage 3 is able to put serious power to the ground on the road or track with all of the items needed to do so reliably.

Once the power output of the RTR Stage 3 Ford Mustang was taken care of, it was onto the handling of this monster muscle car. A JRI coil over suspension setup combined with RTR Tactical Performance 4 way adjustable sway bars, an RTR Tactical Performance watts link rear suspension setup and Whiteline high performance suspension bushings help to ensure that this modified Mustang handles as well as any American muscle car on the road today. The handling capacities of the RTR Stage 3 are finished off by a set of 19” HRE wheels wrapped in Falken FK453 tires although there is also an optional track package that features lightweight HRE 18” wheels and Falken Azenis RT615 rubber for even better grip - although Gittin Jr is likely to favor the tires that spin a little easier for drifting purposes.

Finally, the inside of the new RTR Stage 3 Mustang on display at the 2012 SEMA Show has been upfitted with RTR Spacro racing seats, an RTR rear seat delete package, an RTR rear cross brace and a Stitchcraft upholstery package along with a high fidelity Reus audio system.

Vaughn Gittin Jr, Ford Racing and the folks from Mother’s created one slick looking, high performance Mustang for the 2012 SEMA Show and while we cant expect the production RTR Stage 3 Mustang to follow this show car exactly - this is a great look at the high end RTR package coming to production sometime in 2014. Better yet, after spending roughly the next year touring the country’s auto shows and other various events including the Optima Batteries Street Car Invitational, this mean machine will be auctioned off at the Barrett Jackson Auto Auction in early 2014 with the proceeds going to charity.

LG's New EV Battery Plant Is a Welcome News for Tesla
Tesla Giga Berlin's New Hurdle: It's Not Only the Gov't, but Now Tesla Itself
END_OF_DOCUMENT_TOKEN_TO_BE_REPLACED