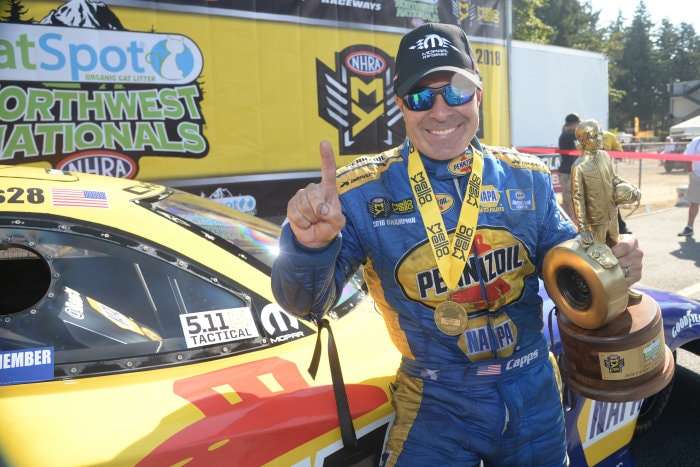 After losing in the final round in each of the two events leading up to the CatSpot NHRA Northwest Nationals at Pacific Raceways, Ron Capps and his Dodge Charger R/T funny car beat Courtney Force in the finals this past weekend to grab his second win of the season and the 60th win of his career.
Advertisement

Ron Capps and the other funny car drivers from Don Schumacher Racing have had a tough season compared to the previous two years. The field had run 15 races prior to this weekend’s stop at Pacific Raceway, during which time DSR Chargers had only won five and Capps had only won once. For comparison, in 2017 Capps won 6 of the first 15 races while Don Schumacher Racing had claimed “The Wally” in 12 of those 15 races. In 2016, Capps won 4 of the first 15 events while DSR teammates had claimed another 4, so with the Mopar teams “only” winning a fifth of the first 15 races of the season and Capps only winning once – it has not been the kind of year that these teams and their fans are accustomed to.

Qualifying
The first round of qualifying for the CatSpot NHRA Northwest Nationals had mixed results for Don Schumacher Racing. After Toyota driver Jonnie Lindberg was the only driver in the field to break into the 3s, Matt Hagan grabbed the second spot with a 4.008 and Tommy Johnson Jr was fifth with a time of 4.027, while Jack Beckman and Ron Capps had junk runs in the first pass.

In the second round, Capps took on Hagan in a battle of teammates and championship contenders, with Capps winning a great side-by-side drag race. Keep in mind that Hagan is driving the new Hellcat-based Charger funny car body while Capps has the "old" R/T-based body. Tommy Johnson Jr beat Robert Hight when the Camaro ran into troubles a few seconds into the run, but Courtney Force was able to drive her Camaro to victory against Langdon in the Toyota. Also, Tim Wilkerson drove his Mustang into the third round by beating J.R. Todd.

That set up the third-straight Dodge-vs-Chevy funny car final and Ron Capps has been in all of them. He lost to John Force two weeks back and he lost to Robert Hight last week, so Courtney was looking to make it a three-peat.

When Force pulled a slightly better reaction time (.078 to .084), she was in good shape early, but engine troubles on the top end allowed the Dodge Charger R/T to jump ahead of the Camaro for the win. This was Ron Capps’ 60th event win in 117 final-round runs, so he is averaging a little better than 52% in the final round over his long, successful career. You can watch the race in the video below.

Season Standings
On the year, Courtney Force leads the race for the title with 1,300 points with Ron Capps sitting second, 154 points back. Robert Hight of John Force Racing is third, 215 points out off first while DSR teammates Matt Hagan and Jack Beckman are fourth and fifth, 236 and 301 points out of the lead.

For those wondering about the other drivers from John Force Racing and Don Schumacher Racing, Tommy Johnson Jr is seventh (-408) and John Force is eighth (-476), so right now, all of the JFR and DSR drivers are in position to quality for the final 6-race shootout to the championship.