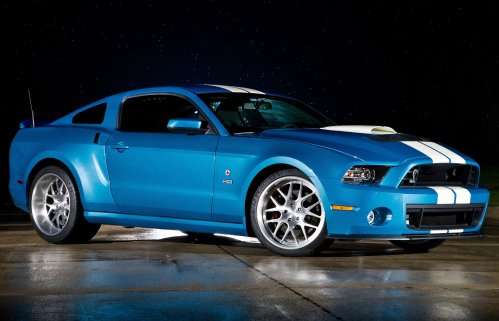 Even though Ford Motor Company hasn’t offered any official information, it is all but official that the next generation Ford Mustang will debut sometime next year and when the highest performance package arrives shortly after – it may be without the Shelby name or the supercharger that currently helps the 2013 GT500 churn out 662 horsepower.
Advertisement

Over the past few years, the biggest name in high performance American muscle cars has become the Ford Mustang Shelby GT500 and with the current GT500 packing 662 horsepower and 631lb-ft of torque – it really has no American competition shy of the Chevrolet Corvette ZR1 and the SRT Viper. The Shelby name has graced the high end Mustang since it was reintroduced for the 2007 model year but if the rumors from the folks at Road & Track prove to be correct – the GT500 could be no more once the next generation Mustang is introduced for 2015.

Even though the Shelby GT500 has been “the” high performance Ford Mustang over the past 7 or so years, the fastest factory-built Mustangs prior to that had been badged at the SVT Cobra. The Mustang Cobra was most recently offered with help from Ford’s Special Vehicle Team (SVT) in 2004 while the Cobra name itself (without the Shelby or SVT prefix) dating all of the way back to the 1970s. Now that Mr. Carroll Shelby has passed on and his legacy has been forever secured in Ford high performance history, there is a good chance that the Motor Company will return to the SVT Cobra name in the coming generation.

More surprisingly than the departure of the Shelby GT500 name from the high end Ford Mustang comes the rumor that the 2015 or 2016 Ford Mustang SVT Cobra could also do away with the supercharged V8 design that has been a mainstay under the hood of both the Shelby GT500 and the SVT Cobra since 2003. Road & Track believes that Ford could go with a naturally aspirated V8 in the next super-Stang – a move that would honestly shock a great many of us in the high performance motoring world. There have previously been rumors that SVT would go away from the 5.8L V8 in the Shelby GT500 in favor of a larger displacement version of the current 5.0L “Coyote” V8 that powers the Mustang GT but those rumors of a Coyote-powered GT500/Cobra always included some sort of forced induction…be it turbocharging or supercharging.

Ford Racing already offers a supercharger package for the 5.0L V8 in the Mustang GT that boosts the power from 420 to 624 horsepower so a slightly larger version of that engine architecture would likely have no problem meeting or exceeding the 662hp offered by the current supercharged 5.8L V8. At the same time, advancements in Ford’s EcoBoost technology has lead a great many of us to expect that the next generation SVT Mustang would feature a twin turbocharged setup to make big power numbers. For Ford to go away from forced induction in favor of a high revving, naturally aspirated engine would not only be a surprising move but it could also put Ford in a tough situation in the current horsepower wars.

The biggest competition for the next generation SVT Cobra (should they go with that name) would be the new Camaro Z/28 and the Camaro ZL1. The ZL1 relies on a supercharged V8 to deliver 580 horsepower while the Camaro Z/28 packs “only” around 500 horsepower with its naturally aspirated LS7 V8. There have been rumors that the next generation Mustang GT could pack as much as 475 horsepower so perhaps an NA SVT Cobra with more power could be possible – although squeezing over 650 horsepower out of a naturally aspirated V8 could be difficult to do without making it a complete gas hog. Even though most consumers don’t care about the fuel economy of their GT500…the federal government does and Ford Motor Company needs to keep that in mind when designing all of their performance vehicles.

Of course, this is all based on rumor and speculation so there is a chance that the next generation SVT Ford Mustang could still sport the GT500 name and a big supercharged V8. With the debut of the 2015 Mustang expected to hit next April, it could be some time before we get any official word but the rumors and speculation are enough to give us all something to talk about – and look forward to – over the next 10 months.