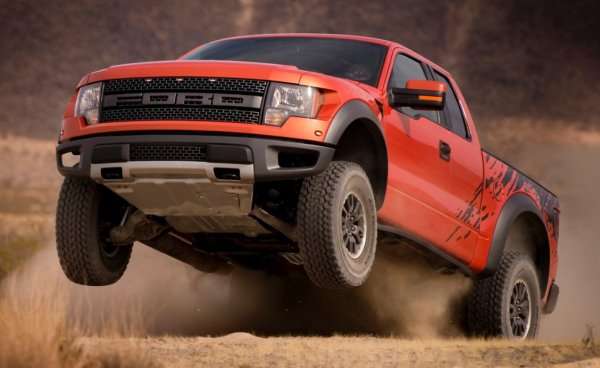 The arrival of a new SVT Raptor pickup based on the aluminum bodied 2015 Ford F150 has been rumored for some time, but amidst the reports of the coming of the Focus RS to the US market included a key point that got lost in the shuffle – a Ford rep confirmed that there is indeed a new Raptor F150 on the way.
Advertisement

According to the folks at Autoblog, Ford Motor Company product boss Raj Nair stated today that there is a new Raptor in the works that will be based on the 2015 Ford F150. Nair also said “I want to get it out as quickly as we can”, and considering the success of the Raptor in past years, it makes good sense for FoMoCo to get the popular Raptor F150 on the market as quickly as possible.

Since the slightly less-than-official confirmation came as a brief comment from Raj Nair and not from a company issued statement, there is no other accompanying information. Fortunately, common sense, spy shots and the information known about the current 2015 F150 lineup allows us to make some guesses as to what we might see when the newest SVT Raptor arrives.

Next Raptor: Same Theory, New Look
When the next generation Raptor F150 arrives, I expect it to be very much like the previous generation SVT pickup. This should include a heavy duty and high performance suspension system that will likely contain components from Fox, a set of beadlock tires wrapped in a set of tires that can handle some serious offroading while still being mild enough for daily driving and body components that allow it to look sportier and make room for the big tires. Expect flared front fenders and rear bedsides, unique front and (possibly) rear bumper designs, perhaps a unique hood and a flashy body graphic that makes it crystal clear that this is a new Raptor.

The 6.2L V8 from the previous SVT Raptor is seemingly dead, which means that the 2015 F150-based Raptor will need a new drivetrain. Ford could go a variety of different directions with the most likely being tuned versions of the 3.5L EcoBoost V6 or the 5.0L V8, although there is the chance that SVT will roll out a new V8 engine specifically for the next generation Raptor.

In any case, the next generation Raptor F150 should have all of the attributes of the previous Raptor but with more power and less weight – making an incredible package even better.

Possible Detroit Debut as a 2016 Model
Rumor has it that the next generation SVT Raptor F150 will debut next month at the 2015 North American International Auto Show in Detroit and should that be the case, the highest performance new F150 could reach showrooms before the end of the calendar year as a 2016 model year vehicle. That is an ambitiously quick turnaround time from introduction to dealership arrivals, but considering that the current 2015 F150 debuted this January in production form and it is reaching showrooms right now – it seems very reasonable for Ford Motor Company to unveil the Raptor next month and have it in dealerships by winter of 2015.

Kafantaris wrote on December 13, 2014 - 9:06pm Permalink
Ford's performance vehicle for 2015 is none other than the aluminum F-150. It accelerates faster than most cars and it stops sooner as well. With half-ton gone from the up-high body panels, the F-150 also corners like it's on rails. And all that while it sips gas. Move over Mustang.
julio wrote on December 24, 2014 - 5:01am Permalink
so its confirmed that there will actually be a 2015 raptor and not as many people say that the raptor production has stopped? so when is it going to come out? and will it still have the 6.2 engine like the 2014 one? thank you very much for the post.