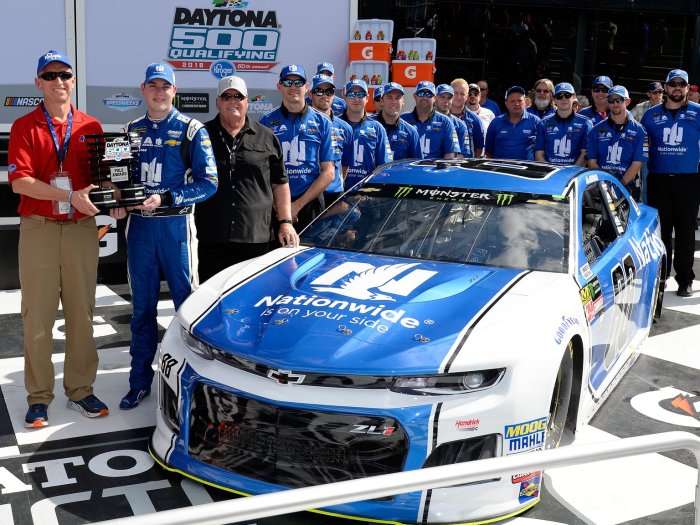 The #88 Chevrolet Camaro ZL1 driven by Alex Bowman turned in the quickest qualifying time this past weekend during single-car qualifying for the 2018 Daytona 500, with the new Monster Energy NASCAR Cup Series race car the start that Chevy fans were expecting.
Advertisement

The current Chevrolet Camaro ZL1 road car is the best-performing Camaro ever and while the race car participating in the Monster Energy NASCAR Cup Series shares no components with the street car, the first Camaro in NASCAR’s big leagues has been engineered to be the best-performing Chevrolet stock car ever. During last weekend’s qualifying efforts for the 2018 Daytona 500, the new Camaro ZL1 did just what fans had hoped – setting the pace as the fastest car in the field and claiming the pole position for the sport’s biggest race.

Camaro Comes to NASCAR’s Big Leagues
The Chevrolet Camaro has spent the past few seasons as one of the leading cars in NASCAR’s Xfinity series but for 2018, the legendary muscle car makes its debut in the Monster Energy NASCAR Cup Series – NASCAR’s big leagues. The Camaro replaces the Chevy SS due to the end of production of the Australian-built performance sedan, but more importantly, the arrival of the Camaro ZL1 race car arrives in time to help the Chevy teams recover from a painful 2017 season.

Although Chevrolet has long been the most successful manufacturer in NASCAR, 2017 was a rough season. Chevrolet drivers only won 10 of the 36 races last season while Ford drivers also won 10 races and Toyota drivers won the other 16 races. More importantly, Chevy drivers didn’t win a single race during the crucial “playoff” portion of the schedule. As a result, Toyota driver Denny Hamlin cruised to the 2017 NASCAR championship while Chevrolet teams looked to improve in 2018.

That improvement started this past weekend in Daytona, with young gun Alex Bowman turning in the quickest lap during the Daytona 500’s single-car qualifying session while 2017 series champ Denny Hamlin and his Toyota Camry grabbed the outside spot on the front row. It should also be noted that Jimmie Johnson turned in the third-quickest time with his new Camaro ZL1 and William Byron was fifth-quickest.

Alex Bowman’s New Full-Time Ride
Even if you are a NASCAR fan, the name Alex Bowman might not be a familiar one. Bowman ran the Monster Energy NASCAR Cup Series Playoffs as a full-time driver back in 2014 and 2015 with relatively lackluster results. He also served as fill-in driver for Dale Earnhardt Jr during the 2016 season, but when Dale Jr announced his retirement last year, he supported Bowman as his replacement in the #88 car.

Team owner Rick Hendrick agreed with Dale Jr, handing over the keys to Bowman for 2018 Daytona 500 qualifying and so far, that appears to have been a good move – as the young driver has put the new Camaro ZL1 race car on the pole for the first ever NASCAR big league race featuring the Chevrolet Camaro.

The 2018 Daytona 500 will be run on February 18th and the rest of the starting order will be decided on the 15th in the Can-Am Duel races this week.