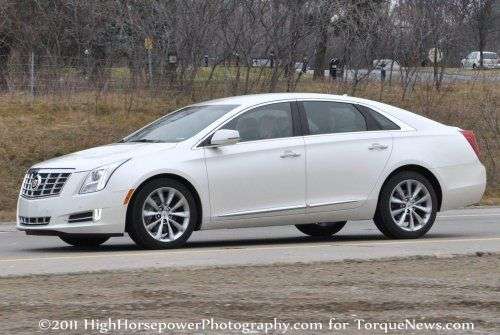 As you can see in the large image on the right and the gallery below (click the thumbnails to access the full gallery), we caught a new Cadillac XTS on the open road a short distance from GM’s Milford Proving Grounds and the lovely young lady driving was good enough to let us hover around her new Cadillac sedan and snap pictures. This is the first time we have gotten a look at the curvy full sized luxury sedan out on the open road and this one is likely still a test model of some sort – suggested in part by the manufacturer’s plates (that have been blurred for the security of the driver, along with her face) and the bar code on the windshield.

This particular model is a new Cadillac XTS4 with 3.6 badging on the back of the car, so we know that this is an all wheel drive model packing the 3.6L V6 currently used in the Cadillac CTS lineup – and pretty much every other vehicle in the General Motors portfolio that offers a V6 engine.

We initially approached the Cadillac XTS from the rear, with the thin LED taillights and smooth, flowing topline offering a distinct look unlike the current Cadillac models (which is what initially caught my eye). While the XTS is a full sized sedan with a large wheel base, the fluid design of the roofline gives it the rough overall shape similar to a coupe. From just behind the windshield, the roof begins to taper downwards, running all the way down to the integrated exhaust tips as there is very little flat trunk area between the rear glass and the hard line that separates the trunk face from the “top” of the car. This is a stark contrast to the current Cadillac lineup that favors a more angular design but this super sleek topline has become popular in the luxury sedan segment. The front end is far more angular than the rest of the car, with the sharp headlights “flowing” up into the fenders while the basic lines up the headlight assembly is continued down through the front fascia, with the low ductwork and the foglights lining up nicely with the LED strip running through the outer edge of the headlights. The large, prominent grille also travels down through the lower fascia, with the style and lines of the lower fascia opening perfectly mimicking the upper portion…and like all good modern Cadillacs, there is a massive brand logo amidst the bright silver grille.

The new Cadillac XTS4 effectively replaces both the Cadillac DTS and STS sedans – two models which often underachieved in terms of sales volume. The new XTS offers prospective Cadillac buyers a chance to get into a premium luxury sedan with more interior (and presumably cargo) space than the popular CTS sedan and with the sighting of the first uncloaked Cadillac XTS on the open road, it is only a matter of time before we see these sleek new sedans at dealerships around the country.

Check out the exclusive TorqueNews gallery on the right of the Cadillac XTS4 by clicking any of the thumbnails and stay tuned to TorqueNews for all of your breaking automotive news.