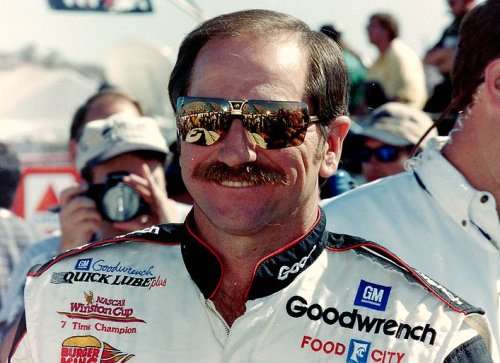 When the 53rd Daytona 500 begins this coming Sunday, it will be an exciting day for the race teams and fans alike, but it will also be the somber 10th anniversary of racing legend Dale Earnhardt Sr.’s on-track death the during the last lap of the 2001 “Great American Race”.
Advertisement

On February 18th, 2001 the 43rd Daytona 500 was on the last turn of the last lap when Dale Earnhardt Sr. came together with Sterling Marlin – sending Earnhardt into the outside retaining wall in what looked to be a fairly innocent looking crash. The normal extraction seemed to take longer than usual as he was loaded into the ambulance and at a press conference 2 hours later, NASCAR President Mike Helton made the announcement that forever changed the sport. "Undoubtedly this is one of the toughest announcements I've ever personally had to make. After the accident in Turn 4 at the end of the Daytona 500, we've lost Dale Earnhardt.”

Earnhardt’s death was something that rocked the American sporting world. At the time, NASCAR was one of the fastest-growing sports in the country and for Dale Sr. to lose his life and leave the sport when he did, it was the racing equivalent of Michael Jordan, Peyton Manning or Albert Pujols losing their life while competing. There have been numerous tribute’s paid by both NASCAR and the rest of the sporting world but as we reach the 10th anniversary of NASCAR’s darkest day, the 2011 Daytona 500 will likely be just as much about remember Earnhardt as it will be watching the 53rd running of the race.

To recognize this sad day, NASCAR has asked that the fans – both in attendance and around the world – remain silent during the 3rd lap of the 2011 Daytona 500. NASCAR has also requested that all announcers of the race remain silent during the 3rd lap and that the fans in attendance stand and hold up three fingers to pay tribute to the man who was not only one of the best in his day, but in the history of the sport. NASCAR will also have a black number 3 paint on the infield grass as they help to commemorate the late, great racer.

The NASCAR world was excited to see Earnhardt’s son, Dale Earnhardt Jr., qualify for the pole position for the 2011 Daytona 500 but Jr. will have to start from the rear of the field after being forced to switch to a backup car due to a crash in practice. The 53rd Daytona 500 kicks off at Noon (EST) this Sunday and you can catch all of the action on Fox.