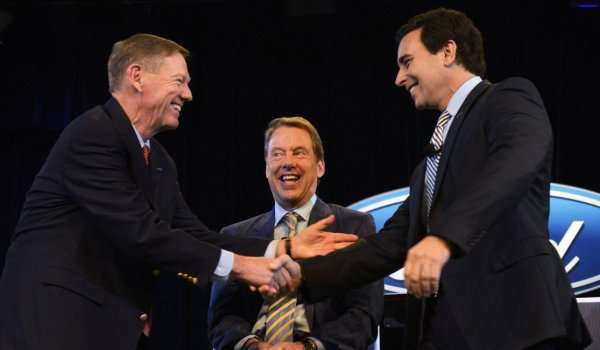 Ford Motor Company announced today that current Chief Executive Officer Alan Mulally will officially retire from his position on July 1st and, as expected, long time Ford bigwig Mark Fields will take over as the top dog at the Motor Company – effectively making Fields the most powerful man in the US auto industry.
Advertisement

There has been a great deal of speculation about the future of Ford Motor Company leadership and that centered around the fact that 68 year old Alan Mulally was probably about due to retire. In the past year or so when this topic has been discussed, it has been expected that Ford would pick Mark Fields as Mulally’s successor, but other names came up in these discussions that led some to believe that Fields wasn’t the lock that others had hoped. The likelihood of Mark Fields taking over the CEO position increased when Fields was promoted from Ford’s President of the Americas to the position of Chief Operating Officer of the entire company. That move was the first towards the official announcement today that Alan Mulally will be stepping down later this summer and Mark Fields will indeed take over his position as the CEO of Ford Motor Company.

“From the first day we discussed Ford’s transformation eight years ago, Alan and I agreed that developing the next generation of leaders and ensuring an orderly CEO succession were among our highest priorities,” Executive Chairman Bill Ford said. “Mark has transformed several of our operations around the world into much stronger businesses during his 25 years at Ford. Now, Mark is ready to lead our company into the future as CEO.”

When Alan Mulally was hired as the Chief Executive Officer of Ford Motor Company back in September 2006 with a daunting task ahead of him – right the sinking ship that wore the Blue Oval. Around that time, Ford stock was hitting record lows and the company was in horrific financial shape, but thanks to the introduction of the One Ford plan, Mulally was able to turn Ford around in a market that was so bad that the cross town rivals were forced into bankruptcy. While GM and Chrysler hit rock bottom in 2008 and 2009, Ford Motor Company saw their numbers slowing improving under Mulally’s leadership thanks to careful investment planning and a string of new, global models that helped to increase profits by reducing costs in nearly every market. When the US auto industry was at its worst – Mulally managed to set Ford straight and the company quickly became the strongest of the American automakers.

“Alan deservedly will be long remembered for engineering one of the most successful business turnarounds in history,” Bill Ford said. “Under Alan’s leadership, Ford not only survived the global economic crisis, it emerged as one of the world’s strongest auto companies. We always will be grateful to Alan for his leadership, compelling vision and for fostering a culture of working together that will serve our company for decades to come.”

While it will come as a disappointment for some to see Mulally leave after he was so instrumental to the financial recovery of Ford Motor Company, he is leaving the company in very competent hands. Fields served as the Executive Vice President and President of the Americas since 2005 so he was along for the entire ride with Alan Mulally. Considering the close relationship between Mulally and Fields during the remarkable comeback from 2006 through 2014, Fields will likely continue to steer the ship on a very similar route. After all, if it isn’t broke...there is no reason to fix it.

“It is a true honor to lead this great company and this talented team into the future,” Fields said. “Under Alan’s leadership, we have seen the power of One Ford and what a culture of positive leadership and working together can accomplish. My commitment is to build on that success by accelerating our pace of progress. All of us at Ford are committed to delivering even more of the great products and innovations that will deliver growth and define our company going forward.”

Before serving as President of the Americas, Mark Fields spent time running Ford’s European operations, which included overseeing the Jaguar and Land Rover brands while they were property of FoMoCo along with helping to bring the Mazda brand back from the dead. With his experience in the global auto industry combined with the strength of the current Ford lineup, Mark Fields shouldn’t have any problems stepping into Mulally’s role and helping Ford continue their strong decade.

“It has been an honor to serve and contribute to creating a viable, profitably growing company for the good of everyone associated with the Ford Motor Company,” Alan Mulally said. “By working together with all of our stakeholders around the world, we now are accelerating Henry Ford’s original vision to open the highways to all mankind. Ford’s future is so bright, and Mark – supported by an experienced and dedicated senior leadership team – is absolutely the right leader to continue to deliver on our compelling vision.”

Alan Mulally will formally retire on July 1st, at which point Mark Fields will be named the new CEO of Ford Motor Company.

While some might question the suggestion that the CEO of Ford is the most powerful person in the US auto industry, the fact that Ford is comfortably the most powerful of the American automakers effectively makes Fields more powerful than Mary Barra of GM while the leading duties at Chrysler are handled by Fiat boss Sergio Marchionne. Depending on who you ask, Fields might be considered the most powerful man in the entire global auto industry but Mr. Marchionne and Martin Winterkorn of VW would likely have something to say about that.