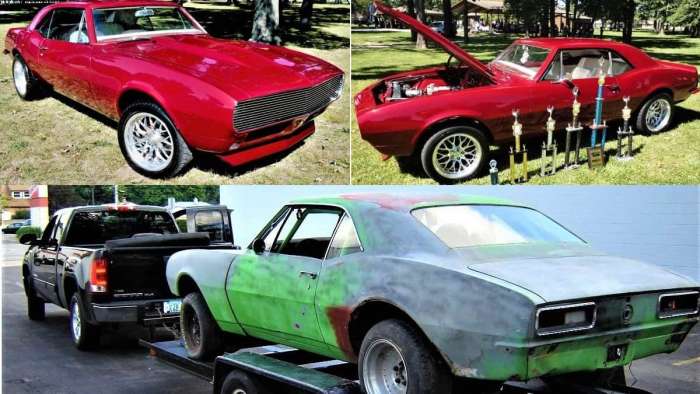 The TorqueNews/Camaros Unlimited Camaro of the Month for March 2019 is the gorgeous dark red 1967 shown here, owned by Kim Whitney and built by her husband, Mike.
Advertisement

For March 2019, the members chose this gorgeous 1967 Chevrolet Camaro with LS1 power and after the community picked this car as their favorite for the month, I reached out to the Whitneys for more information on this modern powered muscle car. Kim’s husband Mike, who handled the build, provided the following information on his wife’s gorgeous machine. Below is his story on the family’s second classic Camaro.

Kimba’s Story
My wife drove my LS3 powered '68 Camaro (October 2018 Camaro of the Month) and was hooked; she wanted one of her own. We found a '67 Camaro on Craigslist for $4700. It was a solid ex-drag car shell in lime green, hanging from the rafters in a barn in central Michigan and came with a lot of loose parts. The car was already mini tubbed with a four link suspension setup and a 12-bolt rear end. Fortunately I have a wife that could see the diamond in the rough.

Once we got it home we immediately tore it down (which wasn't too hard) and got to work on a the build (all in house). To make a long story short, four years later the car now has a rebuilt LS1 and 4L60E transmission, rack and pinion steering, tubular A arms, 17"x10" and 17"x8" billet wheels, RFID keyless Ignition system, Touch screen Kenwood stereo system with Wi-Fi and navigation.

It has an Ivory semi-custom interior, one-piece billet front grill, four-piston Wilwood disc brakes behind all four wheels, LED lights all around and it's wrapped in dark cherry PPG paint. Needless to say but my wife Kim loves her car so much that she named it "Kimba". It even did quite well at car shows its first year after the restoration.