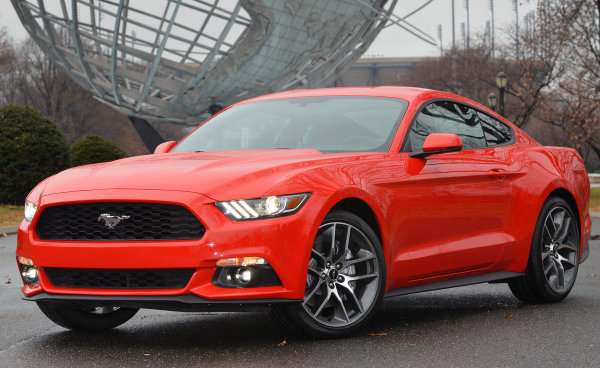 A Look at Why the 2015 Ford Mustang EcoBoost Matters

While Ford Motor Company is expecting the 2015 Ford Mustang EcoBoost to be fairly popular both in the United States and overseas, some are brushing off this new turbocharged engine as little more than a short-run redeux of the old SVO Mustang – but there is a good chance that this engine could play a very big role in the future of the model.
Advertisement

However, unlike the Fox Body SVO and Turbo GT Mustangs, the 2015 Mustang EcoBoost is likely to become far more than just a future collectable sold simply to show off what the automaker is capable of relative to its competitors. The SVO and Turbo GT models were very short lived and sales of those models played a very small part in the success of the Mustang during those years, but the modern turbocharged 4-cylinder model is very likely to make a big splash…one that could make it the better selling option over the base V6.

No Shame in Driving a Turbo 4 Mustang
There are people in the muscle car world who believe strongly that any American performance car should only have a V8 with a manual transmission so while the 2015 Ford Mustang with a V6 is “bad enough”, the idea of a 4-cylidner muscle car is literally blasphemous. They don’t think that there is any real advantage in offering the EcoBoost 4-cylinder into the Mustang since it offers only minor advantages in power and fuel economy, so why bother at all?

It should be kept in mind that more than half of all of the American muscle cars (Mustang, Chevy Camaro, Dodge Challenger) sold in America are powered by the base V6 engine. In other words, more than half of the people who buy a Mustang aren’t worried about driving a V8 or about driving the most powerful muscle car on the street. Those buyers care more about the look of the Mustang so for them, something like a touch more power and a slight advantage in fuel economy is an attractive improvement. A guy who has owned 4 Mustang GT models over the years might not understand, but more than 50% of new Mustang buyers aren’t interested in the V8 and the EcoBoost is just plain better than the 3.7L V6…even if only by a small margin.

The V6 is in Need of Replacing
The 3.7L V6 that will serve as the base model engine in the 2015 Ford Mustang has been the entry level engine in the fabled pony car since 2010 (for the 2011 model year) and this Duratec V6 has done an excellent job of proving solid power and efficiency for base model buyers. However, the Duratec V6 engine is getting to be sort of old as engines go and it is time for something new. After Ford basically promised that there would be a EcoBoost Mustang at some point, many expected to see an EcoBoost V6 similar to the one at work in the Ford F150 and Taurus SHO, but the Motor Company shook things up by introducing the new 2.3L EcoBoost.

As the life cycle of the 3.7L V6 comes to an end, the future Ford Mustang will need a new base engine. Ford could have engineered a new V6 that offers comparable horsepower, but with the spread and success of EcoBoost technology it makes much more sense for Ford to introduce a 4-cylinder engine that offers more horsepower, more torque, better fuel economy and lower emissions. The improvements aren’t massive, but they are more than enough for the new 2.3L EcoBoost 4-cylinder to serve as the successor for the 3.7L V6.

Of course, I would be remiss if I didn’t point out the fact that the 3.7L V6 is still in the 2015 Ford Mustang line, but with fewer standalone options and no Premium package offered it looks as though Ford might be phasing the V6 out – or at least steering prospective non-GT buyers towards the new EcoBoost model. However, provided that the new 2.3L EcoBoost engine does as well as I expect it to do, I wouldn’t be surprised for one second to see the V6 removed altogether in the near future.

EcoBoost Gives Mustang a Global Advantage Over Camaro
While the United States is the biggest market for the Mustang, the 2015 models will mark the first time that Ford Motor Company has marketed the Mustang on a global level. The engine emissions and fuel economy levels of the 3.7L V6 make it an unattractive option for European buyers, but that market is far more accepting of a turbocharged 4-cylinder engine. Because of that, the 2015 Mustang in Europe and other select non-US markets will not get the base V6 but they will get the EcoBoost in addition to the 5.0L V8.

The fact that the 2015 Ford Mustang EcoBoost is available outside of the US gives foreign buyers an option that they do not current have with the Chevrolet Camaro. The Camaro has been available overseas for a few years now, but it is only offered with the 6.2L V8. This gives the Camaro a much higher entry level price since there is really no entry level engine. On the other hand, the 2015 Mustang will have the EcoBoost engine that will give European buyers a more efficient and less expensive option than the Mustang GT.

In the world of the American muscle car, the entry level, non-V8 models are a major player considering a take rate of better than 50% and Ford’s rollout of the new 2.3L EcoBoost for the 2015 Mustang will give it an advantage overseas while giving American base model buyers a more exciting and more efficient engine option.