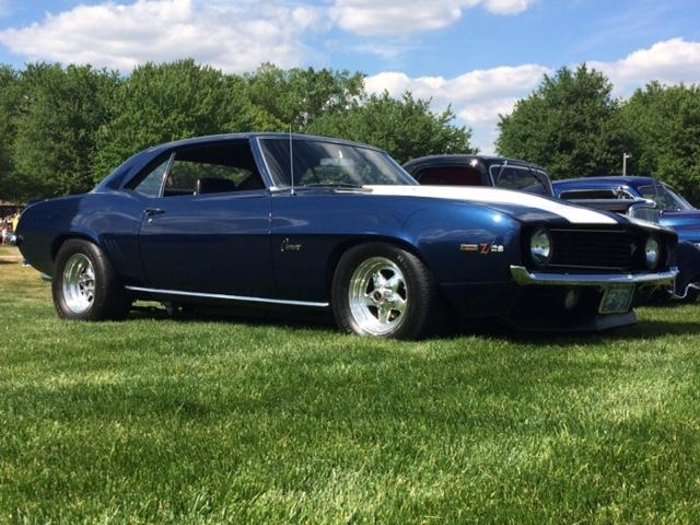 The TorqueNews/Camaros Unlimited Camaro of the Month for June 2018 is the 1969 Chevrolet Camaro Z28 shown here, owned by Bryon Brovont.
Advertisement

For June 2018, our Camaro of the Month is the gorgeous 1st generation muscle car shown here, owned by Bryon Brovont. We reached out to Bryon for more information on his car and below, you will find all of the details on this gorgeous 1969 Z/28.

Bryon Brovont’s Camaro
I bought my Camaro in December 1986. I was looking for a Nova to build at the time. The Camaro was owned by a friend of mine, Arden who was several years older than me. My dad had a part time automotive repair shop at home. He worked on several of the local kids’ hot rods. I spent all of my time in the garage with dad. I had actually helped him work on the Camaro as a kid and rode in it with Arden a few times. I loved that Camaro and it was my favorite of all of the hot rods that had been in the shop. Arden called me one day and told me he was going to sell it and wanted to give me first chance if I wanted to buy it. We made a deal that day yet. I never thought I would end up owning the 69 Z/28 Camaro that I had dreamed about as a teenager!

I brought it home and began tearing it apart right away. I was going to graduate high school in the spring of 1987 and wanted it done for the senior parade and graduation. There was a lot to do and not much time. It was red with black stripes and a black vinyl top. I wanted it to be blue with white stripes and no vinyl top. It also needed new rear quarter panels. My dad and I did everything except the paint and body work. We pulled the motor and Muncie 4 speed transmission out, removed the interior and all the wiring. Then we took the car to the body shop. Through the winter we rebuilt the transmission and built up a .030-over 327 small block Chevy. The 327 was bored out and balanced at Performance Technology, our local speed shop. It has a Comp Cams custom grind cam shaft & a complete Comp Cams valve train. It has World Products Sportsman II 200 cc cylinder heads with 2.02/1.60 stainless valves and 10:1 compression ratio. It’s topped off with an Edelbrock Performer RPM Air Gap Intake. On top of the intake is a Holley 650 CFM street HP mechanical secondary carburetor. It has a complete MSD Ignition System.

The 327 short block is the same but many of the bolt on parts have been changed as new and better parts became available over the last 31 years. The drive train consist of a Muncie 4 speed transmission connected to the engine with a Center Force clutch system. A Hurst competition plus shifter controls the transmission. Out back is the original GM 12 bolt that has Richmond 4:10 gears and Mosier axles. Helping put the power to the ground is a set of Competition Engineering slide-a-link traction bars and sub frame connectors.

It was early spring before we got the Camaro back from the body shop. It had a beautiful dark sapphire blue metallic lacquer paint job with white stripes. Thirty one years later, it still has the same paint job that was done by Bear’s Auto Body. Once the car was home, the rush was on to meet our schedule. The interior got a new dash pad, new carpet and new gauges. My dad and I worked many late nights and sometimes all night to have the car completed in time for graduation. I drove it for the first time about 3 weeks before I graduated. Z/Toy, as it is named, is like a part of the family. My wife and I dated in it, my two sons grew up riding in it to cruise in’s and car shows. (Even when they were babies in car seats). My wife and I enjoy driving it to church on a nice summer Sunday. After 31 years, I still love to just go out cruising in it on a nice summer evening. I don’t think I will ever be done with it. Over the years I have changed things and added new parts with the goal being to add more horse power.

The next big project is I am building a new engine. It’s a 427CI small block Chevy stroker motor. It’s built with a Dart SHP aftermarket block and Eagle forged rotating assembly. It will be awhile before it’s completed.

I want to thank my father for the many hours he spent helping build the Camaro. I had learned a lot growing up in the shop, but without his help and knowledge, I never would have gotten it done on time. A huge thank you to my loving wife, Marlene who spent many hours sitting in the garage, even when we were dating, while I worked on or polished the Camaro. And even 31 years later, she’s still putting up with the same thing. That’s the story of my 69 Z/28 Camaro called “Z/Toy”.