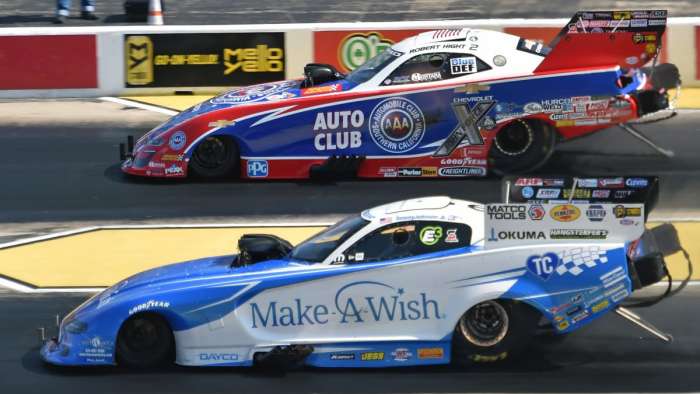 Tommy Johnson Jr drove his Dodge Charger Hellcat funny car to his first win of the season and the 4th for Don Schumacher Racing.
Advertisement

What started off as a rough season for Don Schumacher Racing has slowly transitioned into the same form of domination that we have seen in the past few years from the Dodge Charger funny cars. After winning only once in the first six races of the season, Ron Capps won back-to-back races, followed by this past weekend’s win for Tommy Johnson Jr, as the DSR team drivers are firing on all cylinders.

In the second round of qualifying, a pair of Toyotas jumped into the 2nd and 3rd spots, but Capps remained at the top of the list. The third round saw Johnson move into 3rd, trailing Capps in 1st and JR Todd in 2nd, but in the final round of qualifying, Robert Hight drove his JFR Camaro to the top spot with Tommy Johnson Jr close in second and Ron Capps in third.

The other DSR drivers – Jack Beckman and Matt Hagan – started in the 5th and 8th spots respectively, so all four Dodge Charger Hellcat drivers were in the top half of the bracket. John Force started in the 12th spot and for those wondering, the highest qualifying Ford Mustang was Tim Wilkerson in 10th.

In the second round of eliminations, Johnson beat Hagan in a Mopar-on-Mopar battle, Beckman beat Jeff Arend and Capps lost to John Force while Hight beat Cruz Pedregon. This set up a semifinal round with two Dodge Charger funny cars and two Chevrolet Camaro funny cars, with Hight battling Beckman and Force taking on Johnson.

In the semis, Jack Beckman handed Robert Hight a win when he left way too early with his Dodge, getting the red light, but Tommy Johnson Jr beat John Force badly enough at the line that the Camaro ran a quicker time and speed, and lost. Force ran a 3.953 to Johnson’s 3.972, but with a reaction time advantage of .081 to .137, the Charger got the win.

In the finals, Tommy Johnson Jr and his Don Schumacher Racing Dodge Charger Hellcat took on Robert Hight and his John Force Racing Chevrolet Camaro. Hight had the starting line advantage, but he had to lift when he ran into traction issues around mid-track. This allowed Johnson to pull away, so even when he ran into engine problems on the top end, he still coasted to the win with a 4.175 to Hight’s 4.438. You can watch that final round battle below.

Standings
The NHRA website is having some problems today, so there is currently no information available on the championship standings, but we expect that this problem will be resolved by the time we discuss the next event, slated for this coming weekend at Heartland Motorsports Park in Kansas.