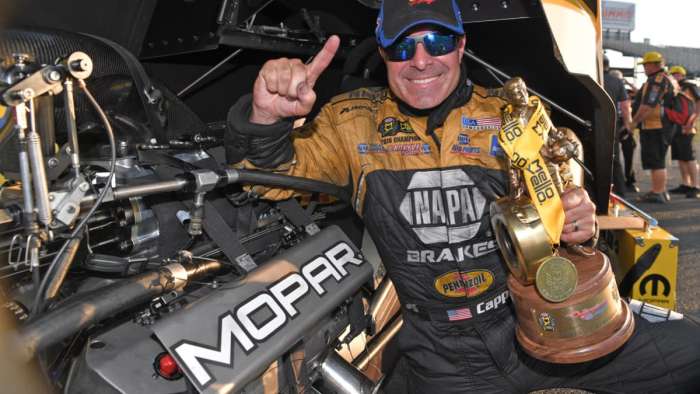 Capps Hellcat Charger Funny Car Races Back to Back Wins

After getting his first win in Atlanta, Ron Capps and his Dodge Charger Hellcat funny car stacked up a second win in Virginia, moving into third place in the championship race.
Advertisement

The 2019 NHRA Mello Yello Championship season has not been a great one for Don Schumacher Racing, winning only one in the first six events of the season while their rivals at John Force Racing won three of those first six races. However, DSR seems to be dialing-in their combination, as Ron Capps has now won back-to-back events while his teammates have put in strong efforts of their own.

Strong Early Start
Ron Capps and the DSR teams came into the Virginia NHRA Nationals with the hopes of carrying over some of the momentum from their previous win and they got off to a strong start. In the first round of qualifying, Capps was quickest, Matt Hagan was fourth and Tommy Johnson Jr was sixth. Johnson would later jump to second and John Force drove his Camaro to the top qualifying spot, pushing Capps to third, but of the four DSR drivers, only Jack Beckman qualified in the bottom half of the ladder, with Hagan starting in the seventh slot.

Meanwhile, in addition to the rivals from John Force Racing grabbing the top spot, his teammate Robert Hight started in the sixth spot while the top Toyotas of JR Todd and Shawn Langdon were in the fourth and fifth spots, setting up a great battle between the top Dodge, Chevy and Toyota drivers.

The top-qualifying Ford Mustang was Tim Wilkerson in 12th.

In the second round, top-qualifier John Force lost to the Toyota of Jonnie Lindberg and Ron Capps beat Robert Hight, knocking both JFR Camaros out of the event. This round also brought about another duel between two Don Schumacher Racing Dodges, with Tommy Johnson Jr beating Fast Jack Beckman while JR Todd beat Shawn Landgon to advance to the semis.

In the semifinals, there were a pair of Toyota Camry funny cars going head-to-head and a pair of Dodge Charger funny cars going head-to-head. In the Toyota battle, JR Todd grabbed the starting line advantage and cruised to victory when Lindberg ran into traction issues. In the Dodge battle, Capps had the lead at the start and he also cruised to an easy win when Tommy Johnson Jr had problems. 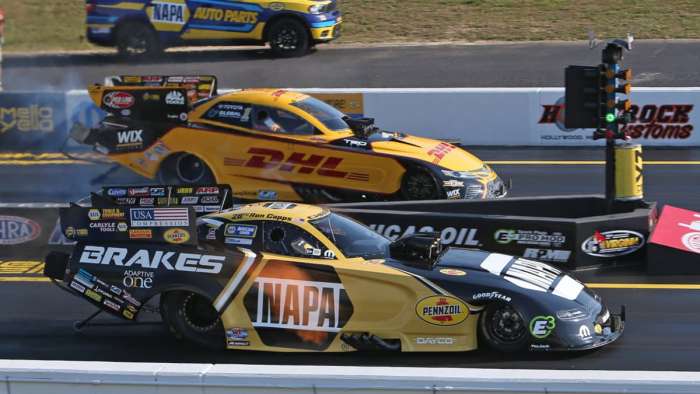 In the finals, Ron Capps grabbed the starting line advantage over JR Todd, but when the Toyota broke, Capps got the easiest and biggest win of the day, running a 4.097 at 310 miles per hour to get the event win.

Season Standings
After the first eight events of the 2019 season, Robert Hight is in the top spot in the funny car title chase with JR Todd in second, Ron Capps in third, Tommy Johnson Jr in fourth and John Force sits fifth. The other Don Schumacher Racing drivers, Matt Hagan and Jack Beckman, sit sixth and seventh, respectively.