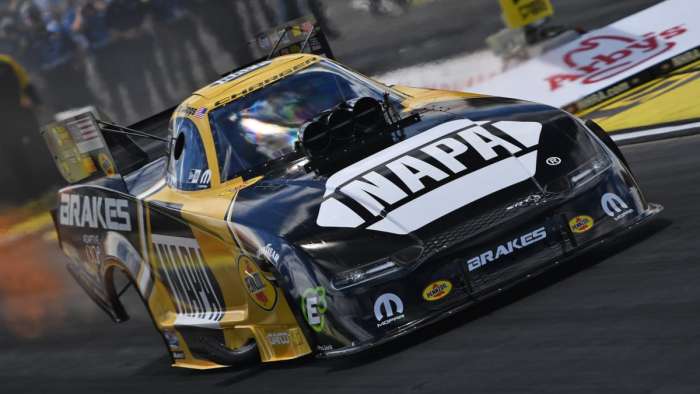 The 2019 NHRA Mello Yello Drag Racing Championship season has not been a great one for the Dodge Charger drivers on Don Schumacher Racing. Coming into this past weekend’s Arby’s Southern Nationals in Atlanta, the only win by a DSR driver came in the second race of the six that have been run, making this the worst start for the Dodge Charger drivers in the past few seasons.

However, things improved in Atlanta, with Capps getting his first win of the season while Tommy Johnson Jr lost to his event-winning teammate in the semifinals.

Rough Start
While the Don Schumacher Racing Dodge Charger funny car drivers finished the Arby’s Southern Nationals strong, they didn’t get off to the start that they would have liked. Tommy Johnson Jr was the strongest qualifier in the 7th position, but Hagan, Beckman and Capps were 10th, 14th and 11th to start the eliminations. Meanwhile, the John Force Racing Chevrolet Camaro funny cars qualified in the 1st and 3rd positions, with the Toyota of JR Todd in 2nd.

The first round didn’t go a whole lot better than qualifying, with Jack Beckman losing to John Force and Matt Hagan fell to teammate Tommy Johnson Jr. Fortunately, Capps beat Shawn Langdon to advance to the next round with Johnson.

Strong Finish
After qualifying poorly and losing two drivers in the first round, Capps and Beckman cut through the competition with their Charger race cars in the second round, with Capps beating Force and Johnson beating JR Todd. On the other side of the bracket in the second round, Robert Hight’s Camaro and Tim Wilkerson’s Mustang won through to the semifinals.

In the semis, Wilkerson’s Mustang managed to outlast Hight’s Camaro while Ron Capps and Jack Beckman had a thrilling heads-up drag race, with Capps getting to the line first.

Season Standings
After the Arby’s event in Atlanta, Robert Hight holds the lead in the championship standings, with a 191 point advantage over second place Matt Hagan. With his first win of the season, Capps is in the seventh position, but as we have learned in the past few years, the regular season standings truly don’t matter at all, so long as you are in the top 8 to 10 when the schedule gets into the last 6 races of the season. Right now, all of the Don Schumacher Racing Dodge Charger drivers are in, but there are 11 more races before the championship playoff format begins.