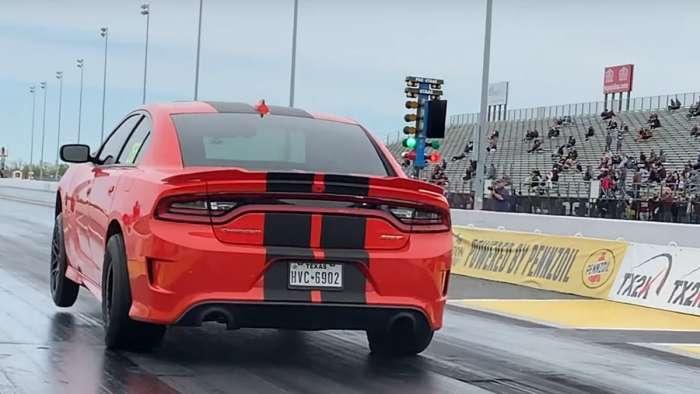 Zdung Ho’s Hellcat Charger ran a 9.13 early in the day to set a record, followed by a big win in the class finals.
Advertisement

This past weekend, America’s fastest street cars came together to duke it out at TX2K and among the vehicles in attendance was the Dodge Charger SRT Hellcat owned, tuned and driven by Zdung Ho. This Charger came into the event as the world’s quickest Hellcat Charger, having set that record back in January with a 9.21-second quarter mile, but it seems as though Zdung Ho had a little more left in the tank for the TX2K crowd.

Next, to set the record back in January, Ho has removed a great deal of weight from his Charger, removing the passenger seat, rear seat, the contents of the trunk, the windshield wiper system, the rear section of the exhaust and the sway bar, while the factory rear brakes have been replaced with smaller, lighter components which allow for the 15-inch rear wheels wrapped in drag radials.

Zdung Ho also had springs from a 2018 Challenger Demon when he set the Charger record last month, and all of the details above were the same for the action at TX2K. Since then, Ho reinstalled a set of BMR control arms with new bushings and a set of high strength axles from the DriveShaft Shop, but for the most part, he has just continued to work on his engine and transmission tuning in order to get quicker times from his supercharged Mopar sedan.

TX2K Action
In the video below, you can watch Zdung Ho’s Dodge Charger SRT Hellcat make a few passes and Houston Motorsports Park at TX2K 2019. First, we watch him grab the top qualifying spot in the Heavyweight class with a 9.245 at 148.41 miles per hour, besting the second place qualifier by more than a tenth of a second. The second run in the video shows the first round of Heavyweight eliminations and on this run, Ho and his Charger set the Hellcat boost-only (no nitrous) quarter mile record with a 9.132 at 149 miles per hour.

Finally, the last run of the video shows the GoMango Charger Hellcat taking on a purple 2014 Cadillac CTS-V Coupe that entered the Heavyweight finals after winning the Street Car class, driven by Beverly Feaster. Feaster is a local racer, so the crowd was pulling hard for the Caddy, but it was not meant to be. Ho’s Hellcat got away first and just kept on pulling, taking the win with a 9.21 to Feaster’s 9.38.