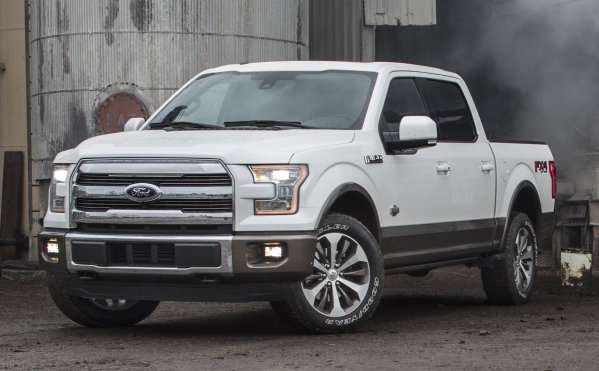 A few weeks ago, Tonight Show Jimmy Fallon announced that he was in the market for a new full size pickup and after weeks of deliberation - and showboating by automakers - Fallon has announced that he will purchase a 2015 Ford F150 King Ranch, but he will have to wait a while as the 2015 F150 isn’t scheduled to arrive in dealerships until later this year.
Advertisement

In early March, Jimmy Fallon announced on his new position as the host of the Tonight Show that he was looking to buy a full size pickup truck - you know, because Im sure that Jimmy Fallon does lots of things that require a full size pickup. Anyways, Fallon said to his live audience that he wanted a truck, but he didn’t know anything about them so he asked his band and his audience for suggestions. One member of the crowd yelled out that he drove a Ford F150, to which Fallon asked how big it was. The guy’s response was “big enough”.

That little segment spurred a great deal of interest from the Detroit automakers, with Ford quickly suggesting that Fallon purchase a 2015 Ford F150 King Ranch. This high end pickup packs the kind of luxury that a TV celebrity would require with all of the truck luxuries that Ford has to offer. Unfortunately, the 2015 Ford F150 isn’t expected to hit dealerships until the 4th quarter of this year so Jimmy could be waiting half a year before he can actually purchase the truck.

General Motors was up next, posting on Twitter that he should consider the new Silverado - which is already on sale. The Chrysler Group went on step further, showing up the 30 Rockefeller Center (where the Tonight Show is filmed) with a loaded up 2014 Ram 1500 complete with a sign asking if the Ram was big enough. The Ram brand social media crew also created the hash tag GutsGloryFallon as a play on their slogan Guts, Glory, Ram. Like the new Silverado, the Ram is on sale now and showing up in New York with one allowed a member of Fallon’s Tonight Show band to drive the new Ram - but that didn’t seal the deal as Fallon continued to talk about various pickups from Nissan, Toyota, and GMC, among others.

Well, last night on the Tonight Show, Jimmy Fallon announced that he had made his decision and he would purchase a 2015 Ford F150 King Ranch. Fallon also announced a contest to see what dealership would sell him the truck, as he allegedly insists on buying the truck himself and does not want to have one given to him. Fallon’s new Fingers on a 4x4 contest will invite salesmen from 12 dealerships to stand with their hands on a new F150 and the last one standing gets to sell Fallon his new Ford truck.

All things considered, this all seems to be something cooked up by someone’s public relations department, but it appears as though Fallon could be one of the first people in America to own the next generation Ford F150. You know, for all of the trucky stuff that he does in New York City.

Doug Crowton wrote on April 4, 2014 - 7:19am Permalink
Wise move Jimmy. Waiting to drive americas best pickup and best selling for a reason is worth the wait