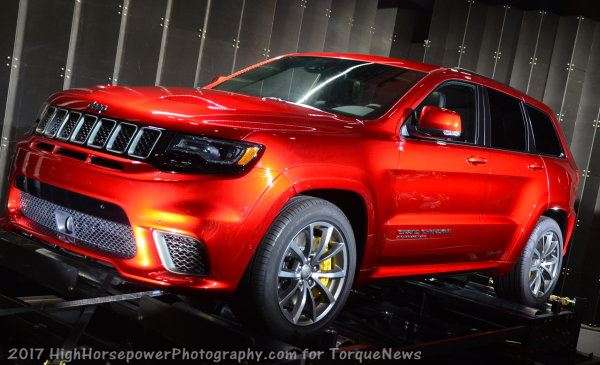 The Jeep Trackhawk could bring Hellcat Power to Australia

Mopar fans in Australia have been clamoring for a right hand drive Hellcat car and while there is no indication that the supercharged Challenger or Charger will soon be offered in that market, it seems likely that the new Jeep Grand Cherokee Trackhawk will bring Hellcat power to Aussie dealerships.
Advertisement

Without some major changes in FCA’s business plan in Australia, that market isn’t likely to get the Hellcat Dodge cars without going through grey market importers, but it looks like the Hellcat Hemi will soon arrive in Australia under the hood of the Jeep Grand Cherokee Trackhawk.

Australia has the SRT Jeep
While the high performance Dodge Charger and Dodge Challenger are not offered in Australia, that market does have the Chrysler and Jeep brand. Those Aussie Mopar fans who want to enjoy SRT performance can get the Chrysler 300C or the Jeep Grand Cherokee with the 6.4L SRT Hemi and with the Charger being so similar to the 300C – many Mopar fans Down Under had hoped for a Hellcat-powered 300.

First and foremost, the Trackhawk appears on the Australian Jeep website with a great deal of detailed information. All of the Trackhawk information is based on the US specifications, but the fact that FCA Australia is listing it on their local market Jeep website shows that the company is at least looking at the possibilities of selling the Hellcat Jeep Down Under.

Next, and perhaps more importantly, there are right hand drive Jeep Grand Cherokee Trackhawk test vehicles running around the Detroit area. There are certainly other right-drive markets which would want a 707 horsepower SUV, such as China, but the demand for American performance vehicles in the Australian market coupled with the current availability of the SRT Jeep, it seems very likely that our Aussie readers will soon have a Hellcat-powered vehicle offered via the local dealership network rather than through costly grey market importers.

Of course, the Hellcat Hemi-powered Jeep Grand Cherokee Trackhawk will have to pass all of the Australian requirements, but provided that the company can work around the legal issues – there could soon be a 707 horsepower SUV in their local dealerships. In the meantime, check out the video below showing the Hellcat Jeep on the dyno at the New York City debut of the new Trackhawk package.