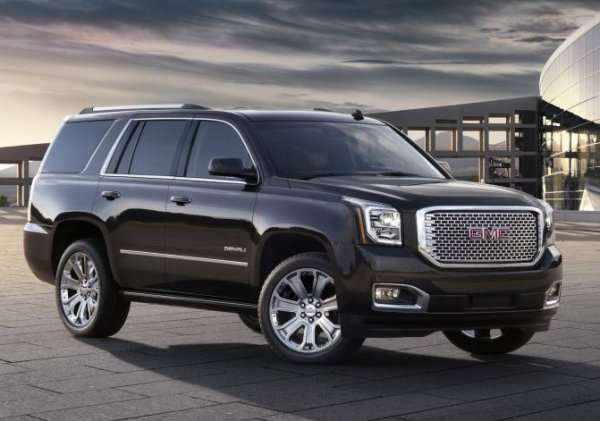 General Motors has offered up the first images and information on the 2015 Chevrolet Suburban, Chevrolet Tahoe, GMC Yukon and GMC Yukon XL, providing pretty much everything that you could want to know about the next generation full size GM sport utility vehicles – shy of official pricing or fuel economy figures.
Advertisement

While the number of body on frame sport utility vehicles is quickly dwindling away to nothing, the 2015 General Motors SUV lineup consisting of the Chevrolet Tahoe, the Chevrolet Suburban, the GMC Yukon, the GMC Yukon XL and the GMC Yukon Denali are introduced with that same technology that has made them so popular over the past few decades. Shy from the front ends – which are distinctly unique between the 2015 Tahoe/Suburban and the various 2015 Yukon models – these two SUVs are remarkably similar to each other in terms of the basic shape and layout. Also, while the differences between the Chevy and GMC next gen SUVs follow similar directions to the Silverado and Sierra pickups, GM is quick to point out that these new SUVs don’t share any exterior components of the related pickups. "There are several new features and enhancements at the core of the all-new 2015 Suburban and Tahoe that will extend the legacy Chevrolet has built as the segment leader," said Tim Mahoney, Chevrolet global chief marketing officer. "Customers will experience greater refinement, efficiency and safety with the same capability that has made Chevrolet the go-to brand for full-size SUVs." While the 2015 Tahoe, Suburban and Yukon lineup maintain the basic styling of the previous generation, these new models look all new from front to back and top to bottom. As was expected (and as it the case with the refreshed GM half ton pickups), the GMC entry has a more high tech look with projection HID headlights shrouded by a row of bright LEDs in one large assembly while the new Suburban and Tahoe offer similar projection headlights but they are nestled in a two piece headlight design without the fancy LED trim. All of the new full size SUVs have a big, bold grille that serves as the crown jewel of the front end with bulging hoods accented with sharp lines. Those lines are echoed through the body side of all of these new Chevy and GMC SUVs to present a powerful, sweeping form from the side that allows these new models to differentiate themselves from the previous generation vehicles that have more of a smoothed look along the sides. When you add in the stretched roofline of these new models with an even larger rear opening than the current models, the Tahoe, Suburban and Yukons have a larger, more prominent look than the outgoing versions of the same vehicles. "We've engineered the Yukon and Yukon XL from the ground up, building on a strong legacy of capability to take them to the top of the segment with exceptional refinement and purposeful technology," said Tony DiSalle, vice president of GMC Marketing. "And when it comes to the tasks people rely on a full-size SUV for, they do it better than ever – and with more style." The 2015 Chevrolet Tahoe and Suburban SUVs are powered by the new EcoTec3 5.3L V8 with 355 horsepower being sent to the wheels via a standard 6-speed automatic transmission. The 2015 GMC Yukon and Yukon XL both rely on that same engine and transmission but the high end Yukon Denali comes with the new 6.2L EcoTec3 V8 that is expected to offer 420 horsepower and 460lb-ft of torque – numbers that would make the Yukon Denali comfortably the most powerful full size SUV on the market. These new SUVs all feature wider wheels and a wider rear track for improved handling but those who want an even better driving experience can opt for GM’s magnetic selective ride control system in the Tahoe and Suburban LTZ models while this high tech system is standard on the Yukon Denali models.

In the long run, the real difference between the 2015 Chevrolet Tahoe/Suburban and the 2015 GMC Yukon/Yukon XL/Yukon Denali is the level of luxury inside and out. Even in simple base form, the new Yukon has more chrome on the outside with higher end finishes and gadgets on the inside than the new Tahoe. The same is true when you compare the 2015 Suburban to the new Yukon XL and when you add the Denali package – the level of luxury from the big GMC SUV rivals that of the cousins from Cadillac. GM has not announced pricing for the 2015 Chevrolet Tahoe, Suburban or GMC Yukon nor have the official fuel economy figures been announced but we can expect all of that information to drop sometime before these vehicles start hitting dealerships around the country in early 2014. All of these vehicles will be built at GM’s Arlington Texas production facility, where the rest of the modern full sized SUVs have been built.

Click the thumbnails above for a closer look at a gallery of the 2015 Tahoe, Suburban and Yukon.