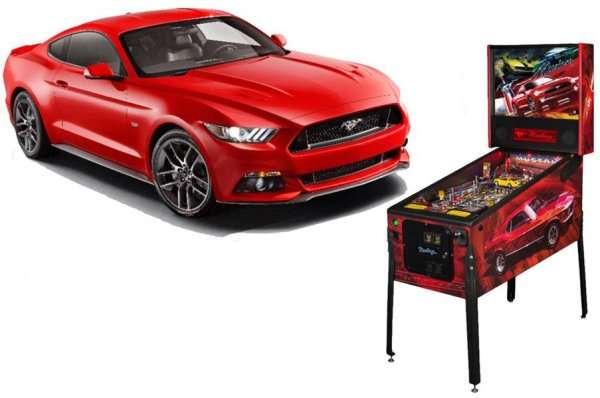 Ford Motor Company has announced that the upcoming Chicago Auto Show will offer a new look at the 2015 Ford Mustang – this time on the backbox of an awesome new pinball machine that is covered head to toe in pieces of Mustang history.
Advertisement

Ford Motor Company has been hard at work, teaming up with other companies to develop some of the coolest Mustang collectables we have seen to celebrate the car’s 50th birthday but this new Mustang pinball machine is – in my opinion – the most exciting piece of modern Mustang memorabilia thus far. Build by pinball machine experts Stern Pinball of Chicago, this new Ford Mustang gaming device will make its grand debut at the Chicago Auto Show on February 6th with the first examples of this new Mustang pinball machine going on sale sometime in March.

“For five decades, Mustang has represented some of the best of American culture, inspiring a feeling of freedom and independence for people around the world,” said Steve Ling, Ford car marketing manager. “We’re excited to have Stern Pinball join us here in its hometown of Chicago with its brand-new games featuring Mustang.”

The Ford Mustang pinball machine is covered in images of some of the most famous pony cars from the last 50 years along with a die cast S197 Mustang sitting towards the top of the play area. Mustangs included around in the artwork are the S197 Boss 302, the original Boss 302, the New Edge Mach 1, the SVT Cobra R and – of course – the new S550 Ford Mustang GT. The gameplay includes “missions” of sorts that have you drag racing, drifting, shifting gears, collecting and modifying various Mustangs from the last 50 years.

This Ford Mustang Stern Pinball machine is unquestionably one incredible, functional collectable for lovers of the mighty Mustang but putting one of these machines in your game room, man cave or arcade won’t be cheap. The basic version that is intended for arcade use with the coin collector and the other features needed for public spaces comes with a price of $4,995. Stern will also offer a premium version of the Ford Mustang pinball machine that will include addition artwork and while this version will be designed with pinball machine collectors in mind – Stern will also have a signed special edition version of the Mustang pinball machine that will feature a heavier dose of unique Mustang artwork and chrome Mustang logos on the speaker grilles for the most diehard Ford fans.

“The first car I ever bought was a 1970 Mustang Sportroof with a 302, and I’m currently restoring a 1969 Mach 1,” said George Gomez, executive vice president for game design, Stern Pinball. “In designing these new games, we wanted to celebrate the freedom and fun of driving Mustang.”