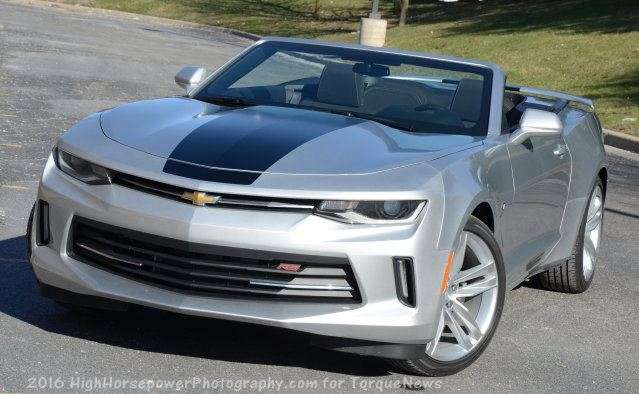 I recently had a chance to spend a week driving the 2016 Chevrolet Camaro 1LT convertible and in addition to enjoying the driving characteristics of the “base V6 model”, I also really liked the interior of this muscle car and honestly, I think that the critics are just looking for something to dislike.
Advertisement

When the first reviews of the 2016 Chevrolet Camaro hit the internet, there were some gripes about the cabin of the new muscle car and when the vehicles reached showrooms around the country, the court of public opinion has focused their negativity on the interior of the 6th gen Camaro. However, after spending a week driving the new Camaro 1LT convertible, I feel like the critics of the 6th gen car were short on negative points so they complain about the cockpit – an area in which I think the new Camaro is very well designed.

Before getting into my views on the interior of the 2016 Chevrolet Camaro, a quick look at my test car. I was driving a 2016 Camaro 1LT Convertible with the RS package, the Technology Package, unique wheels and a strip package. The price as tested with the optional V6 engine, the standard 6-speed manual transmission, destination fees and the options mentioned above was $39,405. While that is a sizeable chunk of change for a “base model muscle car”, I should point out that the convertible feature adds about $7,000 to the bottom line and if you equip a 2016 Camaro 1LT coupe with the same features as the convertible I drove, the MSRP with destination and options comes to $31,510.

Price aside, I want to point out that the 2016 Camaro I drove for a week was a base model with the only interior upgrades being the Chevrolet MyLink infotainment system and a Bose 9-speaker sound system, but everything else is standard for the base model car.

Spaciousness
First up, let’s take a look at the available interior space of the 2016 Chevrolet Camaro 1LT. The seats are all black cloth with contrasting light grey inserts and stitching, with 8-way power adjustments for the driver’s seat and 6-way adjustments on the passenger side. I am 5’10” and I found that I had the best clutch pedal control with the driver’s seat about halfway through the overall travel, so a much shorter driver and a much taller driver should have no issues adjusting the driver’s seat in a manner that makes them both comfortable with all of the vehicle controls. For the sake of discussion, I had my 5’1” wife sit in the driver’s seat followed by a friend who is 6’4” and in both cases, we were able to adjust the seat so that the pedals, the steering wheel and all of the other controls were well within reach. Next, while head room is a non-factor with the top down, the week when I had the 2016 Camaro had days where it was snowing and in the 30s and days where temps climbed up into the low 70s. Because of this, I spent some time with the top up and some time with the top down and in both cases, I had plenty of heard room, but I am only 5’10”. When I had my 6’4” friend sit in the driver’s seat with the top up and with the seat back in the same position, he found that his head was a little closer to the top than he liked. However, when we adjusted the other parameters of the seat, he was able to sit comfortably with access to all of the controls and without his hair brushing the inside of the retracting top.

Finally, the back seat of the 2016 Camaro is just as tight as the back seat of the 2015 Camaro or the 2016 Ford Mustang. While I could adjust the front seats to accommodate a pair of adults in the rear seats, I was uncomfortably close to the steering wheel and the pedals. I was able to drive with this configuration, but I wouldn’t want to spend a few hours making a long road trip while sitting that closer to the dash. I was cramped and uncomfortable, as were the other people in the car. I don’t think that GM would argue that the Camaro is not a great vehicle for four adults nearing 6 feet tall, but I did find that with my wife in the passenger seat and my kid in the back seat on her side, I was able to sit comfortably to drive while they were both comfortable in their spots.

One area where I was able to experience a common complaint from my readers about the 2016 Camaro (and the previous models) is high-angle views, especially among taller drivers. I am not a “taller driver”, so to experience the issue, I jacked the seat up higher than usual and the issue became clear. When I was the first car at a red light around Metro Detroit, more often than not, the traffic light housing is perfectly located behind the top windshield support. With the top up, I found myself leaning way down to see the stop light and with the top up, I would look over the windshield frame to see the light. I found a similar issue when trying to see the street signs accompanying the stop lights, but that problem was only really an issue when I was the first car at the light, when I had the top up and when I had the seat adjusted to put my head higher in the cabin than normal (as an effort to simulate the experience of a taller driver). Really, while this is a nuisance, the conditions in which the problem occurs is uncommon enough that I have a hard time really complaining about this issue.

The 2016 Chevrolet Camaro is a sports car and the cabin is designed like a cockpit, wrapping around the driver in a way that brings everything very close while still offering plenty of space for the driver and front passenger. The rear seat is tight, but no tighter than the prior Camaro or the new Ford Mustang. Whether you are very tall or very small, you should be able to adjust the seat of the new Camaro to drive it comfortably, but you likely won’t want to spend much time with other adults seated in the back.

Technology
My 2016 Camaro 1LT was fitted with the $800 Technology Package, which adds the 8 inch touchscreen-based Chevrolet MyLink infotainment system and a 9-speaker premium Bose sound system. This infotainment package offers touchscreen access to the sound system, the navigation system, the hands-free phone system and vehicle settings with the help of a small panel of buttons and a single knob just below the touchscreen. Someone who dislikes touchscreen technology will likely have an issue with the new Camaro with the MyLink system, as you definitely have to use the touchscreen to recognize the full potential of the system, but the basics – like volume control, track/preset selection and the Home button – are all accessible via the control below the touchscreen or on the steering wheel. In addition to track/preset selection, volume control and cruise control buttons, the sporty, leather wrapped, flat bottomed steering wheel also has controls for the driver information screen in the gauge cluster and a voice control button for the hands-free phone system. That driver information screen offers a handful of readouts - from a digital speedometer to media information to navigation commands – and while it isn’t quite as fancy as the cluster of the Camaro SS, this is a great looking gauge layout for the “base model Camaro”.

Finally, while the heating and air conditioning system isn’t as high tech as it is in some new vehicles, I really like the unique functionality of the 2016 Camaro HVAC controls. The climate control system interface is located at the bottom of the center stack, below the infotainment screen and directly in front of the shifter. It utilizes a row of simple buttons for the fan direction, the power and the front and rear defroster along with two huge knobs which also serve as the lower, central air vents. Rather than separate vents mounted up around the top of the dash, the central vents are mounted low on the console and in addition to directing air – they also control the interior temperate and the fan speed. The outer ring of the driver’s side vent turns to adjust the desired temperature and the passenger’s side vent controls the fan speed.

The interior of my 2016 Chevrolet Camaro 1LT test car doesn’t slap you in the face with every high tech gadget on the market, but with the inclusion of the $800 Technology Package, I have a hard time demanding more gadgets. This base model Camaro has a great sounding Bose speaker system, a premium touchscreen infotainment package, a thorough driver information screen in the gauge cluster and steering wheel controls to help the driver make changes on the fly without taking his or her hands off of the wheel.

Overall Layout
The 2016 Camaro 1LT offers plenty of front passenger space and all of the high tech amenities that a buyer would expect from a $30k car, but in addition to what the new Camaro offers – I really like the overall layout of the 6th gen car with its simple black and silver accented cabin. I like the 2016 Camaro’s refreshed dual-hump dash with the two big analog gauges flanking the driver information screen with the otherwise flat dashboard. I like how the infotainment touchscreen is located immediately to the right of the steering wheel in a location that prevents the driver from having to look far from the road to glance at the navigation or radio screen. I like how literally everything that I need to touch while driving is well within reach for me without leaning forward away from the seat. Especially when the top is down, the dashboard design gives the interior a super clean look, accentuated by the compact packaging of the infotainment system and the HVAC system.

Some critics of the 2016 Camaro will slight the interior for being “too plain”, but in reality, this car offers everything that you could possibly want from a base model muscle car – it just puts it all in a neater package than many other cars on the market today. The 2016 Camaro is proof that a well-appointed interior doesn’t have to be a cluttered buttonfest and honestly, I can’t think of anything that I would change about the cabin of the newest GM muscle car.

Click here for a closer look at my first drive review of the 2016 Camaro 1LT Convertible with the V6 engine.