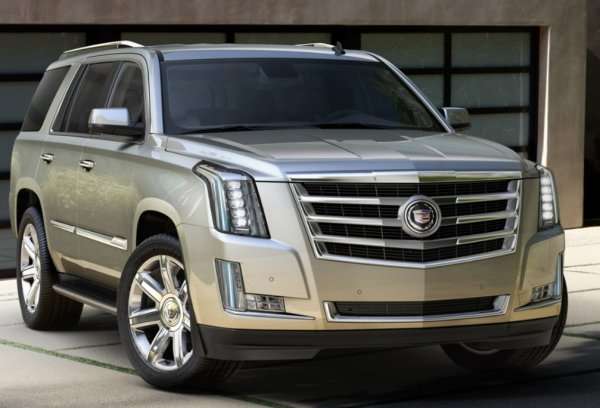 Here is the 2015 Cadillac Escalade Inside and Out

After teasing the 2015 Cadillac Escalade in headlight, badge and interior images, General Motors has dropped the full details on the next generation super luxury sport utility vehicle along with a full complement of images showing the new mansion on wheels.
Advertisement

First off, the 2015 Cadillac Escalade will follow the similar chassis and drivetrain features of the current Escalade lineup meaning that the 2015 version of the full size SUV is available with rear wheel drive or four wheel drive and either the normal (shorter) wheel base or the longer wheelbase ESV version. A 6.2L EcoTec3 V8 is standard with 420 horsepower and 460lb-ft of torque being sent to the wheels via a 6-speed automatic transmission. General Motors’ third generation magnetic ride control suspension system is standard with both Tour and Sport modes to ensure the best ride quality and handling for the given driving situation.

“Cadillac’s growth provides the ideal stage for the all-new Escalade to take a major leap forward,” said Bob Ferguson, senior vice president, Global Cadillac. “The 2015 Escalade is completely new and elevated in design and technology, inside and out. The clear objective is to once again assume the leadership position among luxury SUVs.” As we expected, the 2015 Cadillac Escalade looks a great deal like the new Chevrolet Tahoe, Chevrolet Suburban, GMC Yukon and GMC Yukon Denali along the sides but up front and out back, the Escalade gets a look that is predictably all-Caddy. This begins with a face that is a clear evolution of the face found on the current Escalade with an even higher tech look than we see on the current models. This includes harder lines in the hood that flow down through the more sharply styled front fascia and the new grille that takes a bolder approach to a similar look at the current grille with more prominent horizontal lines running across a larger opening. Flanking that new grille setup is a set of headlights that are thinner than the current model’s headlights with a row of five projection units mounted alongside LED lighting on the outside that lines up with the LED lighting in the fog light bezels. These lights, the new grille treatment and the sharp styling have done wonders for the rest of the current Cadillac lineup and this design language looks awesome on the 2015 Escalade. Out back, the 2015 Cadillac Escalade has a much bolder design than the outgoing models with the most significant feature being the gigantic LED taillights that start low on the rear end and travel up along the rear corner pillars – reaching all of the way to the molded spoiler that runs across the top of the rear roofline. Where the current Escalade doesn’t have a design that screams Cadillac, this new back end does just that. Whether you are looking at the front end or back end, there is no mistaking the Escalade for the Tahoe, Suburban or Yukon with which it shares so many components.

Along the sides, the 2015 Cadillac Escalade has similar lines to the Chevrolet and GMC large SUVs but that isnt a bad thing by any means. Helping the Escalade to stand out when viewed from the side is a light touch of silver trim that includes the unique nameplate on the front doors and on the standard 20 inch wheels (22 inch wheels are also offered). Of course, to give the Escalade that limo look, the rear side windows are tinted very dark with chrome trim wrapping around the door windows keep us reminded that this is a high end luxury SUV. Inside, there arent many surprises revealed in the new 2015 Cadillac Escalade images – mostly because the interior “teaser” from last week revealed so much. What we do see is a plush seating design that is found not just up front but also in the second row captain’s chairs and in the third row. As we expected, the 2015 Escalade features a huge infotainment screen mounted above a collection of high tech touch sensitive controls while the gauge cluster/driver information center utilizes a thin film transistor (TFT) adjustable display with a similar heads up display to the one that I loved while testing the 2013 Cadillac XTS. I recently tested the 2013 Escalade and I was very impressed with the roomy luxury SUV and I would imagine that the upgraded interior, the more powerful drivetrain and the sharpened interior will only make a great vehicle even better. Based on what I have seen in these new images, the 2015 Cadillac Escalade should allow GM to secure the title for the biggest, most luxurious and most powerful full sized sport utility vehicle sold in America.

Click any of the thumbnails above for a look at more images of the 2015 Cadillac Escalade inside and out!