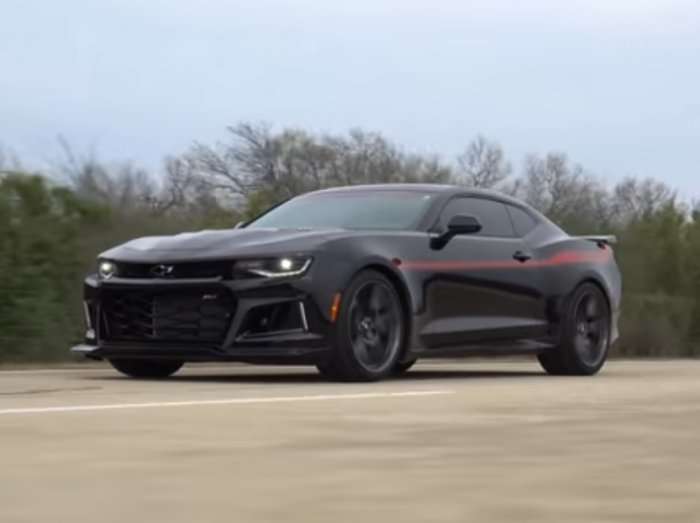 The folks at Hennessey Performance have taken their new Chevrolet Camaro ZL1 with their “Exorcist” package to the Continental Tire Proving Grounds to see how fast the 1000-horsepower muscle car would go – with an impressive top speed of 217 miles per hour.
Advertisement

Over the past year, the Hennessey Exorcist package has been the most talked-about aftermarket option for adding gobs more power to the newest Chevrolet Camaro ZL1. The Texas tuner lifts the put from 650 to 1,000 horsepower, but what does that equate to in real-world performance? To find out, John Hennessey took their Camaro Exorcist track car to the Continental Tires Uvalde Proving Ground facility, where an 8.5-mile high speed oval was waiting.

The results of the test – and the resulting video from that session – are very impressive.

Hennessey’s Exorcist Camaro
If you aren’t familiar with the Hennessey Exorcist package for the 6th generation Chevrolet Camaro ZL1, it lifts the output to 1,000 horsepower by adding a 2.9L supercharger, a larger intercooler system, ported cylinder heads, a new camshaft, 1 7/8 inch long-tube headers with high-flow catalytic converters, a high-flow intake cold air intake system and an engine tune that brings everything together with the best possible results.

As you likely know, Hennessey launched the Exorcist package shortly after Dodge introduced their Challenger SRT Demon package. The Challenger is the first American car to run a stock 9-second quarter mile time and while the Exorcist Camaro is yet to prove that it will keep up on a drag strip, it looks like it will beat the Dodge on the top end.

As tested, the Hennessey-modified Camaro has a price of $119,950 and only 100 will be built – 20 of which have already been delivered to customers.

The Top Speed Blast
As you can see in the video below, the Hennessey Exorcist Camaro rocketed around the Continental Tires test track and on the mile-long straightaway, the top speed of 217 miles per hour was achieved. This run was made with the 10-speed automatic transmission and when 217 was reached, the car was in 9th gear. In theory, this Camaro could have gone even faster with more track, but at this facility, the team had to “settle” for 217 miles per hour.

For those wondering, that is considerably faster than the official 168mph top speed of the Dodge Challenger Demon on pump gas, but it has been proven that with race gas – the 840-horsepower SRT machine can get up over 200 miles per hour in a standing 2.3-mile run. On this track, it seems possible that the Challenger could reach similar speeds, but until we see proof of that, the Camaro Exorcist will beat any stock muscle car sold in America.

Of course, some people will point out that with 1,000 horsepower, this modified Camaro ZL1 should be able to beat the stock competition. More importantly, that top speed makes this the fastest 6th gen Camaro in the world.

In any case, the Camaro sounds incredible during the run so crank up your speakers and enjoy!

Hemi Mopar wrote on February 22, 2018 - 9:05am Permalink
Do the same to the Demon... and than see results! You should know better when comparing vehicles! Apples to apples... common sense!