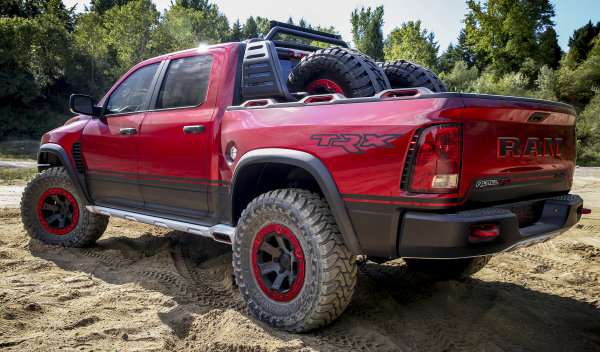 We know that there is a Hellcat Hemi-powered Jeep Grand Cherokee on the way in the next year or so and we expect that it will be called the Trackhawk, but before the Ram Rebel TRX Concept we had never seen a Hellcat in anything other than a rear-drive car – leading me to believe that the Hellcat Ram Concept is intended to tease the Hellcat Jeep.
Advertisement

Since the Dodge Charger SRT Hellcat and Dodge Challenger SRT Hellcat were introduced, high performance fans have been clamoring for more Hellcat vehicles – namely a Jeep, a Durango and a Ram 1500 packing the incredible supercharged engine. We learned at the 2016 Detroit Auto Show that there is a Jeep Grand Cherokee with the Hellcat Hemi coming to market by the end of 2017 and we have seen video of what is believed to be one of the supercharged SUVs testing. However, we hadn’t seen any official proof of FCA working with a Hellcat in anything other than a Challenger or Charger until the Ram Rebel TRX Concept was introduced at the State Fair of Texas.

On the surface, the Ram Rebel TRX Concept is the Hellcat powered pickup that so many people have been hoping to see, but this truck could be more than just a cool concept truck. This supercharged half ton pickup could preface a production version of a Hellcat-powered Ram, but more importantly, the Rebel TRX Concept shows that FCA knows how to make all of that power work with something other than a rear wheel drive car.

Ram Rebel TRX Concept Cues in a Jeep
The Hellcat Hemi in the Dodge Challenger and Charger produces 707 horsepower and 650lb-ft of torque while the Ram Rebel TRX Concept offers “only” 575 horsepower from a similar, 6.2L supercharged Hemi which does not technically wear the Hellcat name. There have long been rumors that the Jeep engineers were having a hard time putting together a supercharged Grand Cherokee that won’t chew up all-wheel drive parts. The rumor of the 707hp Hemi tearing up AWD parts has gone hand in hand with another rumor that to fix this problem, the Jeep Trackhawk will have less power than the Hellcat Challenger and Charger.

Even though the Ram uses a heavy duty Borg Warner four wheel drive transfer case, a heavy duty rear differential and heavy duty axles all around, the Ram engineers opted to go with a slightly less powerful supercharged engine. With 575hp, the Ram Rebel TRX Concept packs more power than any competitive vehicle, but that lower power rating might preserve the four wheel drive parts. Fortunately, some of these high performance drivetrain bits would be ideal for the supercharged Jeep, although the Grand Cherokee will likely have a full-time all-wheel drive system rather than the Ram’s part-time 4WD system.

If FCA plans to use a less powerful version of the Hellcat Hemi – which likely won’t be called the Hellcat – in the Jeep Grand Cherokee Trackhawk, the Ram Rebel TRX Concept could be our first official look at this specially tuned supercharged Hemi. A Jeep with that 575hp engine would be among the most powerful sport utility vehicles in the world with only the Porsche Cayenne (570hp), the Mercedes Benz AMG GLE models (577hp), the Bentley Bentayga (600hp) and the Mercedes Benz AMG G Class (621hp) packing more power.

Of course, there is the possibility that the Ram Rebel TRX Concept engine was detuned specifically for high performance off-road use, while the Jeep Grand Cherokee Trackhawk will be designed for on-road use. Because of the different intended use, this non-Hellcat supercharged V8 in the Jeep could pack slightly more power – but still less than the Hellcat Dodge cars.